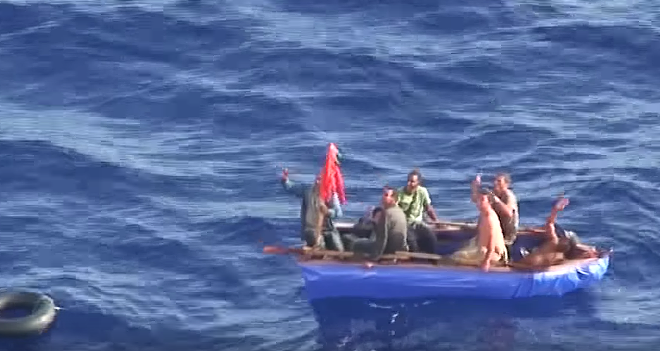 President Barack Obama's statement reads in part: "Effective immediately, Cuban nationals who attempt to enter the United States illegally and do not qualify for humanitarian relief will be subject to removal, consistent with U.S. law and enforcement priorities. By taking this step, we are treating Cuban migrants the same way we treat migrants from other countries."

U.S. Coast Guard Atlantic Area Commander Vice Admiral Karl Schultz oversees the Florida straits, the Caribbean and the Gulf of Mexico. In a statement today, he says, "I urge Cuban-American communities to discourage the people of Cuba from putting their lives at risk in dangerous and illegal at-sea crossings."

"Our role in the enforcement of U.S. immigration laws remains unchanged in light of Thursday's announcement. The Coast Guard’s highly trained crews aboard cutters, aircraft and small boats remain ready and continue to work with our DHS partners to stop any attempts at illegal immigration to the United States. If anyone attempts to illegally immigrate by sea the U.S. Coast Guard will stop them and repatriate them in accordance with U.S. law and international agreements.

Safety of life at sea is top priority for the Coast Guard and our DHS partners. Taking to sea in a poorly-constructed, ill-equipped craft is extremely dangerous. Every effort will be made by the Coast Guard to stop illegal voyages before they potentially end in tragedy."


The decision made under President Obama's administration could be reversed in as little as two weeks, should President-elect Donald Trump decide to. Cubans who already arrived in the country under "wet foot, dry foot" will be grandfathered in. Since the warming of relations with Cuba that began in December 2014, there's been a rise in Cuban immigration.