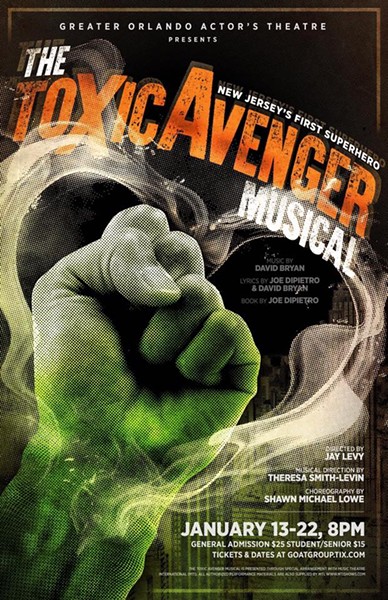 For more than a decade, playwrights have been mining their musty VHS collections of B-grade horror films in attempts to create a Rocky Horror-style campy cult classic for the 21st century. Following in the farcical footsteps of Evil Dead: The Musical comes The Toxic Avenger Musical, the award-winning 2008 Off-Broadway spoof that’s finally getting its Orlando debut thanks to producer Paul Castaneda’s Greater Orlando Actor’s Theatre.

GOAT’s goofy production gets its title and inspiration from Lloyd Kaufman’s notorious 1984 low-budget superhero satire, which is set in the septic city of Tromaville, New Jersey (my home state). Adam McCabe, last seen as Jekyll and Hyde in GOAT’s previous murder musical, stars in another dual role as Melvin Ferd the Third, an environmentally aware nerd who still lives with his mother (Leesa Castaneda), until he’s dumped into toxic waste and emerges as a mop-swinging mutant crusader. Toxie battles the corrupt Mayor Belgoody (also Castaneda) and her ethnically ambiguous henchmen (Adam DelMedico, Daniel Martinez), while wooing librarian Sarah (Jillian Gizzi), a blind blonde bombshell whose biggest dream is an Oprah book endorsement.

McCabe and company dive into this silly sludge with an admirable absence of self-consciousness, investing more enthusiasm than the paper-thin material probably deserves. Fans of the admittedly awful original film will be disappointed that Joe DiPietro’s book barely references the original storyline, omitting numerous signature elements (no health club, junkyard, or tutu) and ham-handedly hammering home an ecological moral straight out of the short-lived Toxic Crusaders cartoon. The original’s R-rated T&A and gratuitous gore have been bowlerdized down to a mild PG-13, and Toxie’s persona is equally unrecognizable, exchanging naively overblown nobility for fourth wall-breaking snark; it’s almost as if the author never watched the film, but merely glanced at the Netflix description before penning the script.

The score, written by Bon Jovi keyboardist David Bryan, fares a bit better, especially when it sticks to classic ‘80s hair metal style, such as the bitchin’ opening ensemble number, “Who Will Save New Jersey?” Gizzi shines in a of couple up-tempo girl-group numbers; Castaneda duets with herself in an exhausting insult aria; and DelMedico outdoes NYC’s Naked Cowboy strumming the mock-Mellencamp “Legend of the Toxic Avenger.”

Unfortunately, the overlong first act features a few too many indistinguishable mid-tempo power ballads, the type you’d fast-forward past on your Walkman. And while the role is a more suitable showcase for McCabe’s rock & roll belt than Wildhorn was, his opening night performance was bedeviled by microphone mishaps that left him shouting gamely but vainly, buried beneath both musical director Theresa Leigh Smith-Levin’s powerful live band and a funky face-mask that obfuscates any facial expressions.

Castaneda – who aptly deemed the show a “glorious disaster” during his curtain speech – and director Jay Levy keep the action moving while leaving the leads a long leash for improvisation, and the dance and fight choreography (by Shawn Michael Lowe and Bill Warriner, respectively) wittily wobble along a fine line between slapstick and slapdash. In my opinion, satire is most successful when the characters still take their situation seriously, and though some of this production's performances pushed into self-parody, Gizzi and DelMedico both exhibit pitch-perfect parodic instincts that consistently kept me entertained.

Like the movie it’s loosely based upon, the Toxic Avenger Musical is a lightweight lark that’s likely best appreciated while well lubricated. Polish off a beverage or three at the Orlando Shakes bar before showtime, and don’t go in with any expectation of polish, and you’ll probably enjoy Toxie just as much as the applauding audience around me did.