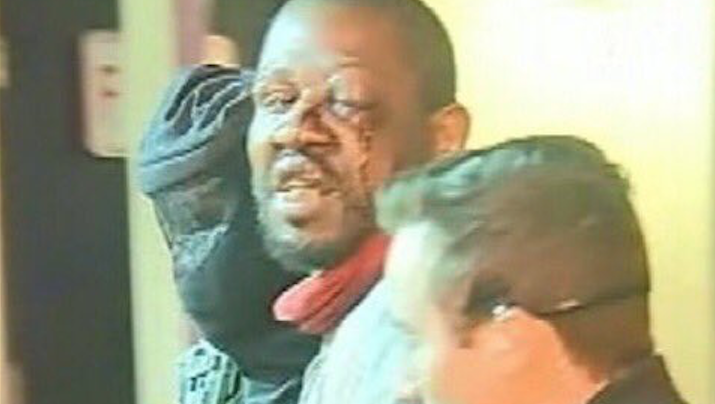 Markeith Loyd, a wanted murder suspect and subject of a massive nine-day manhunt, was finally brought into custody last night, and he's still in the hospital recovering from what appears to be a lot of "resisting."

At this point, what happened after Loyd put his guns down Tuesday night, to when he arrived at Orlando Police Headquarters is vague at best, and we should be asking questions about the situation surrounding his bloody face.

What we shouldn't be doing is cheering that a suspect, not a convicted criminal, was beaten to the point he's still in the hospital.

The Orlando Police Department says after discovering that Loyd was located at an abandoned home in Carver Shores, officers surrounded the residence at approximately 7 p.m. on Tuesday. Loyd, who was wearing body armor and carrying two handguns (one of which had a 100-round drum), attempted to escape through the back door, but was was confronted by officers. He then retreated back into the home and reappeared in the front doorway, where at some point he dropped his guns and surrendered.

Markeith Loyd was wearing body armor when he was apprehended. And had these guns in his possession. pic.twitter.com/T0AfzZibmA

So, what happened after that?

At this point all we know is that a bloodied Loyd was transported into Orlando Police Headquarters where he yelled, "They beat me up! They beat me up!" to nearby cameras.

During the press conference that followed, Orlando Police Chief John Mina was asked about Loyd's claims of police brutality and he responded, "He did resist arrest. He does have some facial injuries. We're waiting to see if he needs to go to the hospital. The injuries look minor to me."

Loyd then reappeared for his perp walk completely covered in bandages and wearing a zip-up coverall. It was reported that he could only see out of one eye. Loyd was then transported to Orlando Regional Medical Center, where he is still being treated for his injuries.

So far, there has been no update on Loyd's condition.

Markeith Loyd, being escorted out of OPD HQ. pic.twitter.com/MyxP88bHxl

"There was force used," Mina says. "And we do an investigation into that any time we use any type of force so it’s premature to talk about the exact nature of the force used and the circumstances surrounding it, but we’ll investigate that use of force just like we investigate any use of force."

The only problem is, there's conflicting reports from authorities of how exactly Loyd resisted. Mina says there was enough resistance from Loyd to issue force. However, one officer told Jeff Deal of WFTV 9 that Loyd cowered and gave up like "a little girl."

Officer told me word in the department is Markeith Loyd cowered and gave up "like a little girl." #WFTV pic.twitter.com/BjUZQZ7p32

So, which was it? Because if it's later found that excessive force was used, then OPD may have severely damaged their case against Markeith Loyd. If Loyd did indeed cower like a "little girl," his face shouldn't look like it took a dozen baton swings.

Whether Loyd is found guilty or not, his mangled face is a problem, especially when you consider the fact that the Orlando Police Department has an awful record when it comes excessive force.
In November of 2016, the Orlando Sentinel published the results of a 10 month report that found OPD used force on 3,100 people, causing 1,900 injuries, from Jan. 1, 2010, through Dec. 31, 2014.

And, in April of 2016, following criticism of excessive use of force, Mina issued a department-wide directive, telling officers to use "only the minimal amount of force necessary."

I guess we'll find out in the coming weeks if the minimal amount of force was used on Loyd.