Man wears swastika on University of Florida campus, gets 'jumped'

A man wearing a swastika armband was reportedly attacked near the campus of University of Florida after his presence drew a crowd of more than 200 protesters.

According to the Independent Florida Alligator, the man has been identified as Michael Dewitz. A spokesman for the Gainsville Police Department told the paper that Dewitz was "jumped" shortly after 2 p.m. on Thursday by two men unaffiliated with the university.

The assailants, who were also white, stole Dewitz's jacket and armband after attacking him, officials say. Dewitz suffered minor injuries.

For two days straight, Dewitz made appearances at the University of Florida wearing his swastika armband, both times causing outrage among students and drawing responses from school officials. 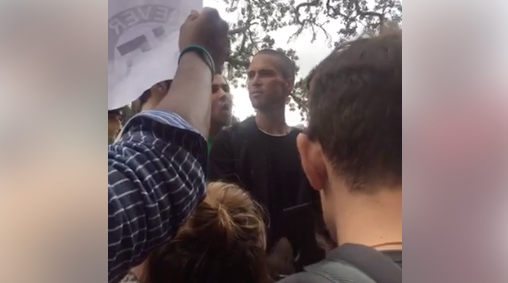 Dewitz was first spotted riding a bike at Turlington Plaza on Wednesday afternoon, following an event organized by the Jewish Student Union. On Thursday, Dewitz stood on a bench in Turlington Plaza, drawing a crowd of more than 200 protesters, who shouted chants like, "No more Nazis!"

Protestors surround man wearing swastika. Police stand and watch. This is happening on the University of Florida campus in Gainesville, Fla.

On a related note, outspoken Neo-Nazi Richard Spencer was punched in the face again.

Correction: A previous version of this story said Dewitz was punched in the face. This however, wasn't the case. Dewitz was kicked.