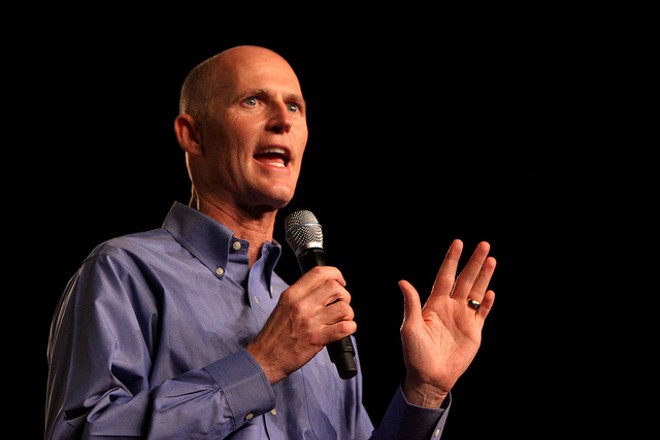 Florida Gov. Rick Scott is proposing to spend $45 million to boost salaries of corrections and probation workers, with the aim of cutting down on overtime expenses and increasing safety in the state's troubled prison system.

The bulk of Scott's proposal —- $38 million —- would increase base salaries for correctional workers. The governor's plan does not include across-the-board pay hikes but would offer an 8.5 percent increase for entry-level prison guards by raising starting pay from $30,926 to $33,500 a year, according to Scott spokesman McKinley Lewis.

Scott's plan also would hike the base pay for correctional sergeants, lieutenants and captains by 10 percent, Lewis said, and would result in salary increases for a majority of the state's 24,000 corrections and probations workers.

The governor's proposal, which will be part of a full budget plan released next week, also includes $5 million to allow prisons with sustained vacancy rates of more than 10 percent to offer one-time, $1,000 hiring bonuses to corrections officers, Lewis said.

"The governor believes in making investments in the Department of Corrections that allow that agency to better recruit officers and ensure that they have an experienced workforce," Lewis said Friday. "These investments will allow them to address vacancies and hiring challenges they have had and also work to improve officer safety at the institutions and decrease the cost of overtime."

Since taking over as head of the Department of Corrections two years ago, Secretary Julie Jones has pushed lawmakers to boost funding for additional staff. Jones has blamed a rash of prison riots and spikes of violence in large part on staff turnover and manpower shortages.

The "unacceptably high vacancy rates … are negatively impacting the Department's ability to fulfill its mission,” the agency wrote in a legislative budget request submitted in October.

The corrections agency's turnover rate increased by 100 percent last year while overtime costs skyrocketed by more than 200 percent, according to the request.

"This high turnover rate has a dramatic effect on the department's ability to manage an already difficult population," agency officials wrote, blaming the low salary levels for the turnover and recruitment problems.

"I think that's a really good starting offer. Of course we want to see across-the-board (raises). It's been a while, and everybody there needs a raise. But it's really encouraging that the governor is putting forth a plan like this. He's getting in the direction of fixing the salaries," Puckett told The News Service of Florida.

Scott is expected to release his full budget proposal for the 2017-2018 fiscal year Tuesday at an Associated Press annual pre-legislative session gathering of reporters and editors.

Puckett said his union will soon make known its budget wish-list, which will include across-the-board raises and will address "longevity issues."

Corrections workers have had one raise in the past nine years, and Scott's proposal would double the last pay hike for many prison staff.

"There's a lot of catching up to do. But when you're going to negotiate and everybody's talking about pay raises and money, that's a good sign," Puckett said.