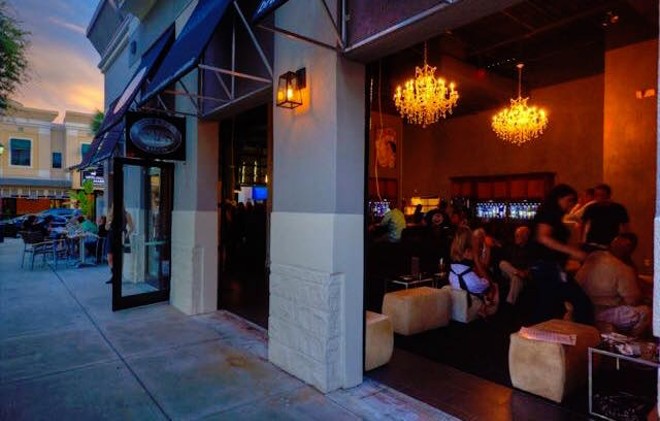 Regal Winter Park moviegoers’ most conveniently located watering hole, Taps Bar and Restaurant, is soon to be Firefly Kitchen and Bar. Celebration residents Lisa Amoresano and Jeff McNeil have already taken over as owners and rebranding is underway.

Also underway is a thorough remodel. The TV-mounted partition separating the spacious front bar and secluded wine lounge should come down at the top of the month, opening up the entire space. The wine lounge’s crystal chandeliers are coming out as well, and Mason jars and Edison bulbs are going in, dangling from soon-to-be installed wooden beams. The main dining room’s Viking hall-length high-tops have already been replaced with standard four-tops.

Amoresano assures beer nuts that maintaining one of Orlando’s most underrated tap lists will remain a priority, while they'll also add moonshines (because Southern drunk!) and new wines (because wine drunk!) to the menu. Speaking of vino, Amoresano and McNeil have fixed the Enomatic wine dispensers, long dormant under Taps’ purview, so load up your payment card and start pouring. Expect live music to make a return on weekends, with a weekly open mic night soon to follow, as well as holiday shindigs like crawdad boils.

Upcoming events like the Super Bowl party and Hopslam Ale release will continue to fly under the Taps banner, and the Taps Winter Park Facebook page will remain active until the space’s remodeling and rebranding wraps up. Firefly’s metamorphosis should be complete by late February.