On Monday, the White House issued a list of 78 terror attacks that President Donald Trump claims the media didn't adequately cover, or chose to ignore, including the June 12 mass shooting at the gay nightclub Pulse.

While visiting MacDill Air Force Base in Florida yesterday, Trump used the occasion to rail against the media and its so-called poor coverage of terrorism.

Trump stated that attacks were happening "all over Europe" and that "it's gotten to a point where it's not even being reported."

"And in many cases, the very, very dishonest press doesn't want to report it. They have their reasons, and you understand that," Trump added.

According to CNN, White House Press Secretary Sean Spicer later clarified that Trump "felt as though members of the media don't always cover some of those events to the extent that other events might get covered; that a protest will get blown out of the water, and yet an attack or a foiled attack doesn't necessarily get the same coverage."

The White House then released a list of 78 terrorist attacks that were not adequately reported on. Here's the list: 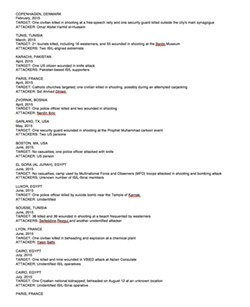 For the record, Orlando Weekly has written hundreds of stories about the Pulse shooting, even without including our weekly profiles of the 49 victims. The Orlando Sentinel, WMFE, local television stations, and literally everyone with a keyboard reported on Pulse. To say the media as a whole chose not to report on Pulse, or didn't cover it adequately, is a flat-out lie.

If Trump needs to justify his controversial temporary ban on citizens from seven Muslim-majority nations from entering the U.S. by saying the press ignored the largest mass shooting in modern history (or Paris, or San Bernardino), it won't work.

We welcome Donald Trump to go through our archives if he needs proof.