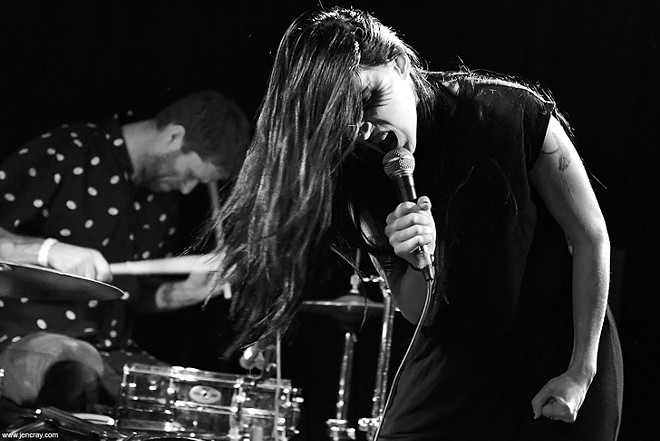 Like an encyclopedia of heavy metal, probably no other promoter in the Orlando area covers the spectrum as well as Endoxa Booking. But when it reaches out to the genre’s furthest extremities like in 2015 with the amazing Author and Punisher show, Endoxa makes some of its best, deepest and most interesting additions to the scene. Count the latest synth-thick production featuring Gost, Autarx and Moondragon (Feb. 5, Will’s Pub) as one of its most memorably bold.

Headliner Gost is, by careful design, an interesting figure. Musically, his hammering dark-synth sound borrows from ’80s horror film soundtracks, takes aesthetic cues from black metal and drops the crunching thunder like Justice. In presence, the mysterious American producer executes with dramatic flair, athletic performance and a fantastic skull mask. The performance was so physical at one point that he overturned his whole rig in the heat of the moment, stopping the show, only to recover with maybe his most pulverizing song of the night. It’s a winning formula filled with hooks that in some ways makes perfect sense and in other ways is total alchemy.

Had Gost come along during the golden age of the industrial scene, he would’ve been not only a sensation but possibly a salvation. He packs way more modern aggression and relevance than the terrible gothic techno that industrial dance music has become. The damned now have their Deadmau5.

Synth music is getting an increasingly fairer shake right now but the live bar for such acts is almost institutionally low. Gost, however, brings the excitement on stage even without a fancy setup. This could easily get big. Not that there’s necessarily much demographic overlap, but he did manage to pack out Will’s Pub despite it being Super Bowl Sunday.

If Gost takes inspiration from ’80s sounds, local one-man act Moondragon is straight worship. Armed with a video screen and a whole lotta synth, he’s a direct warp back to the sleek electro drama of perhaps what was, sonically, the last true brave new world. His retro-futurism is all in on the digital dream and excess of the ’80s – no arty abstraction, just pure fidelity and revivalist immersion. The thing is, though, it’s also very well done. His set was essentially a half-hour Knight Rider soundtrack, which middle-school me will simply not permit adult me to reproach. When experienced in concert with vintage video loaded with action and speed from jets, racecars, and movies like The Last Starfighter, The Wraith and The Terminator, it’s sweet neon nostalgia.