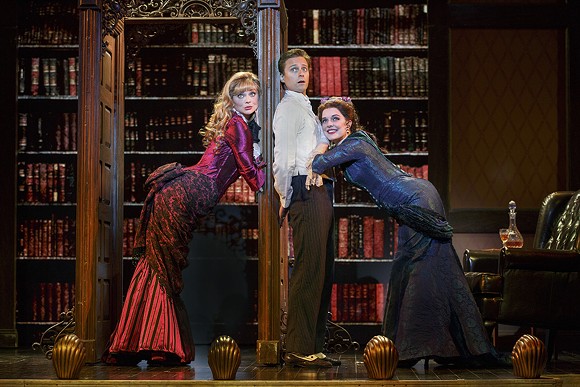 Questions of class warfare, social mobility, and noblesse oblige are currently shaking America’s foundations, but transplant those issues to Edwardian England and you’ll bring down the house. That’s the lesson learned from A Gentleman’s Guide to Love and Murder, the mirthfully misanthropic musical playing this week at Orlando’s Dr. Phillips Center. Imagine Edward Gorey directing the cast of Downton Abbey in a remake of Clue and you’ll have an inkling of the wicked pleasures found within this fantastic farce.

After setting the tongue-in-cheek tone by warning any fainthearted viewers, “For God’s sake, go!,” Gentleman’s Guide introduces the remaining audience to Montague “Monty” Navarro (Kevin Massey), a bright and ambitious young man in early 20th century London, condemned to limited prospects by his low birth. Monty has hardly buried his beloved mother when an old family friend (Mary VanArsdel) reveals his secret lineage, which leaves him ninth in line to the earldom of Highurst Castle.

The only thing standing between Monty and is birthright are eight members of the D’Ysquith (rhymes with “dies quick”) clan, all played by John Rapson in a Peter Sellers-worthy display of comedic range and quick-change skills. As Monty dispatches his relatives with growing relish, he finds himself caught between two women – his materialistic married lover, Sibella (Kristen Beth Williams), and Phoebe (Kristen Hahn), the winsome widow of one of his victims – making him the most appealing adulterous serial murderer in the musical theater repertoire since Mack the Knife.

Massey makes a fine leading man, with the boyish looks and buoyant energy apropos for this amiable assassin, but he and his fellow players are outdone by Rapson, who embodies each aristocratic victim – male and female – with a unique voice and physicality. From ambiguously gay apiarist Henry to politically incorrect crusader Lady Hyacinth to rampaging Lord Adalbert – whose outrageous aria “I Don’t Understand the Poor” could be our new president’s theme song – each of Rapson’s increasingly ridiculous appearances (and untimely exits) is cause for riotous laughter.

I’ve never read the original Roy Horniman novel Israel Rank, nor seen the Alec Guinness film Kind Hearts and Coronets the book also inspired, so the plot of Gentleman’s Guide came as a refreshing surprise to me. But even if you are already familiar with the story, Darko Tresnjak’s dance-like direction (aided by Peggy Hickey's choreography) is a delight to watch. Scenic designer Alexander Dodge’s ornate sliding stage-within-a-stage and Aaron Rhyne’s backdrop projections frame the action as it unfolds like carefully crafted clockwork, with every hilarious head-snap or slammed door timed with the precision of a classic Looney Tunes cartoon. Every technical element, from Linda Cho and Charles G. LaPointe’s period costumes and hair to Dan Moses Schreir’s crisp sound design, works in concert to create an exceptionally well-polished production.

Steven Lutvack’s recitative-heavy score is melodically unmemorable, but makes a solid underpinning for his rapid-fire lyrics, written with book author Robert L. Freedman; at points Gentleman’s Guide gives Hamilton a run for its money in the syllables-per-second department, but the cast never falters in their exacting enunciation. Though the subject matter may be dark, Gentleman’s Guide left me more lighthearted than most so-called “feel good” shows, which is both a reflection of the play’s quality and my own twisted sense of humor. For satirical skewering of upper-class twits with a side order of absurdist ultraviolence, this Monty is even more faithful to the Python spirit than Spamalot.

A Gentleman's Guide to Love & Murder