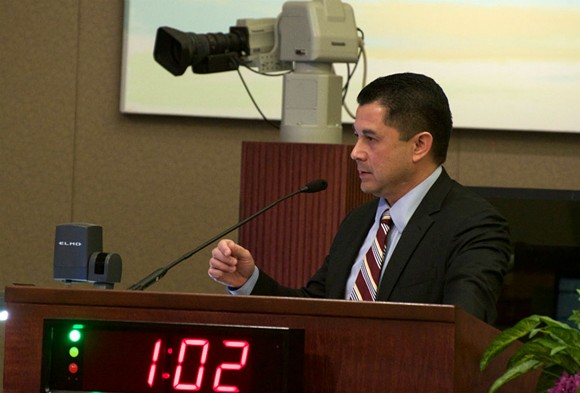 Living as an undocumented person in American can be a "living hell," says Henry Lim, an Orlando immigration attorney.

Lim knows from his experience. As a child, he and his family escaped persecution in Nicaragua and requested asylum in the United States. Their request was denied, and for the next 14 years, Lim's family lived in fear of deportation and being separated. After resolving his status through immigration court, Lim eventually became a U.S. citizen, and his experience inspired him to become an immigration attorney. It's the reason why on Tuesday, Lim and several advocates spoke in front of the Orange County Commission to ask that the county protect vulnerable communities, including adopting some policies associated with "sanctuary" cities and counties.

"No one is advocating for open borders, but we're here for a comprehensive solution where we deal humanely with families that contribute to society," he says. "Until you've been in an office where a mom and her 4-year-old child are literally torn apart from each other– because the mother is about to be deported and the child is a U.S. citizen, because the mother is sacrificing being with her child to go back to a war-torn country– until you've seen the anguish on both their faces, then come talk to me why that is a good policy to have in this country."

So-called "sanctuary" cities and counties are in the news again after President Donald Trump released an executive order punishing local government that don't detain undocumented immigrants for federal officials by taking away federal funding. In California, where there are multiple sanctuary cities and counties, Attorney General Xavier Becerra says local jurisdictions don't want to violate the U.S. Constitution by holding people for immigration authorities that they no longer have a reason to detain. Advocates also say that when undocumented immigrants are reported by local police to federal authorities, it destroys trust for law enforcement and discourages immigrants from reporting crimes.

While Orange County is not a sanctuary county, other Florida counties like Broward, Hernando, Hillsborough, Miami-Dade, Palm Beach, Pasco and Pinellas counties were considered sanctuary counties by the Center for Immigration Studies (despite its name, the Southern Poverty Law Center considers CIS an "anti-immigrant" organization.) Miami-Dade County Mayor Carlos Giménez is currently embroiled in a controversy after he ordered county jails to comply with federal immigration detention requests in the wake of Trump's crackdown.

Back in Orange County, Florida A&M University law student Phillip Arroyo says advocates aren't necessarily asking for commissioners to consider becoming a sanctuary county, but they are asking for a dialogue to talk about those practices or other alternatives to protect immigrants.

"Immigrants play a very important role in the economy of Orange County," Arroyo says. "Our No. 1 industry is tourism. If you go to hotels, theme parks, restaurants, you will see immigrants serving you. Last year, over $66 million was generated through tourism industry. Imagine what would happen if there's mass deportations and we lose that workforce?"

Debbie Soto, the daughter of Argentine immigrants, teared up as she spoke to commissioners about how her parents fled the country's military regime in the 70s to seek a better life.

"Our country right now is torn, and it's causing a great divide," she says. "It's unfortunate because this country was raised on the backs of immigrants who helped build this country."

"Sometimes, when we go outside the realm of what we have jurisdiction over, we create expectations that we can’t satisfy," Jacobs tells the Sentinel. "I really, strongly believe that while individual cities may find a way to try to intervene in the immigration debate, it’s Congress [and] our federal government that needs to address how we’re going to move forward."