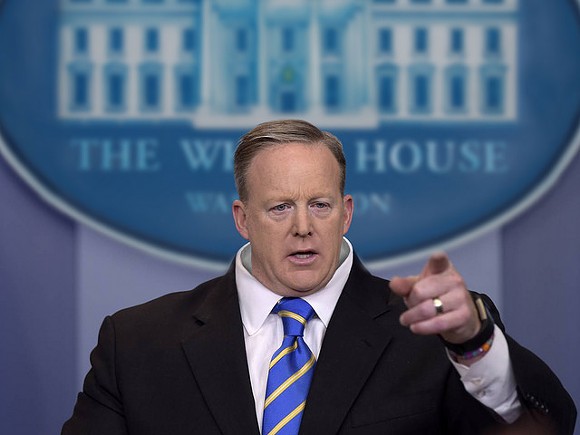 Sean Spicer, White House press secretary and swallower of 35 pieces of gum before noon, says he "clearly meant Orlando" when he repeatedly referenced a nonexistent terror attack in Atlanta during interviews and a press briefing last week.

While defending President Trump’s travel ban affecting seven majority-Muslim countries, Spicer meant to say Orlando a total of three times in the span of two days. That's three times he forgot about the largest mass shooting in modern history, and instead referenced a city whose only two terrorist attacks had nothing to do with Muslims (one was by a Florida-born, anti-gay, anti-abortion tourist, the other by a white supremacist).

The press secretary first referenced the mystery Muslim attack in Atlanta on Jan. 29 on ABC's This Week, and again on MSNBC's Morning Joe on Jan. 30. It was also brought up one more time in an official press release on Jan. 30, according to the Associated Press.

“I don’t think you have to look any further than the families of the Boston Marathon, in Atlanta, in San Bernardino to ask if we can go further," said Spicer on Jan. 30. "There’s obviously steps that we can and should be taking, and I think the president is going to continue do to what he can to make sure that this country is as safe as possible."

After literally no one could figure out what attack Spicer was referring to, the press secretary clarified his previous statements in an email to ABC News, saying he "clearly meant Orlando."

Trump and his surrogates have been using Orlando, San Bernardino and Boston as examples for defending his "not a Muslim ban" Muslim ban. However, none of these examples help Trump's argument and more importantly, his list of countries doesn't make any sense.

Pulse shooter Omar Mateen was a U.S. citizen, born in New York to Afghan parents. Like the Boston bombers and the San Bernardino shooters, Mateen self-radicalized in the United States on his own and had no direct ties to any terrorist organizations. He was inspired by foreign terrorist groups, but he had no connections to any of them.

If this ban was actually about keeping us safer from known terrorists, why isn't Afghanistan on Trump’s list of travel-banned countries? Or Pakistan, where one of the San Bernardino shooters was born?

Shit, neither Kyrgyzstan or Russia is on Trump's list, you know, where the Boston bombers were born?

The only thing any of this has in common is the religion of Islam. That's it. But of course, as Trump has repeatedly said over the past couple weeks, his travel ban doesn't target Muslims. It also makes about as much sense as Spicer's daily gum diet.

Correction: A previous version of this story said both Boston bombers were from Kyrgyzstan, which is incorrect. The older brother was born in the Soviet Union, now Russia.