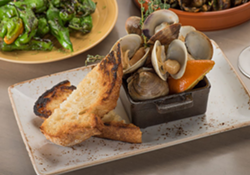 It's going to take you about 45 minutes to drive from Downtown Orlando to Chroma Modern Bar + Kitchen, nestled in the Medical City section of Lake Nona. But it'll be worth it.

The restaurant somehow manages to merge modern with cozy – you'll be happy to sit there for an hour or two and take in as many new-American fusion tapas as you can. Here are three of our favorites, plus one of their garden-to-glass craft cocktails we swooned over on our last visit.

1. Skillet Roasted Clams ($11)
Surprisingly meaty littleneck clams are steamed and drowned happily in butter, garlic, thyme and a little citrus (shown, above). The crusty bread should not be used as a vehicle for the bivalve, but should be saved to mop up all the buttery deliciousness at the bottom. 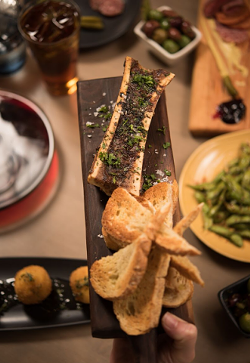 2.  Roasted Bone Marrow ($13)
I'm reading Trevor Noah's memoir Born a Crime right now, and in it he talks about how when he was a kid growing up in apartheid South Africa, he used to eat bone marrow because there was nothing else available that his mother could afford. Now, when he goes out to a chichi restaurant and someone's like, "Oh, you must try the bone marrow. It's divine," he's like, "...wut?" The split shin bone at Chroma really is divine though — the marrow spreads like butter on the crusty bread, and whatever fat is left pooling at the bottom of the bone should be sopped up with some of the bread, or funneled straight into your mouth.

3. Lamb Ribs ($11)
The fatty, meaty morsels are settled on top of Korean-style daikon and carrot pickles, a nice foil to the unctuous charred meat. There have been plenty of lamb ribs in my life before, but none as satisfying as these. Typically, you'll get some skinny ribs and then a couple of thick ones to balance it out, but all four of the ribs that came on this plate were worth going full caveman and gnawing down to the bone. 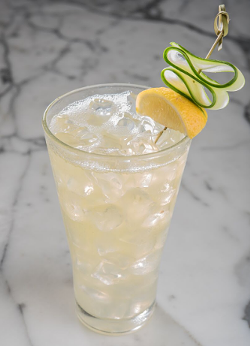 4. Bonus Cocktail: Teatime Collins ($10) Tom Collins' are generally the archetypal old-man drink, but the addition of fresh chamomile-infused simple syrup and a little muddled ginger elevate this classic. This is the kind of drink you'll want to sip on one of those repressively humid summer days we're about to be reintroduced to. The only thing that could make this drink better is if it came in an unlimited pitcher for brunch.