“The students, united, will never be defeated!”

The UCF chapter of Students Organize for Syria organized the “March for Humanity,” partnering with other organizations such as College Democrats, the Muslim Student Association, Amnesty International, the United Nations Association and the Eleven-Nine Coalition.

Amirah Mathin, president of the UCF Students Organize for Syria group, says that she was disappointed and frustrated when she heard about the “Muslim ban” Trump enacted on Jan. 27.

“I believe this is a land of opportunity and inclusion … We see all types of races, cultures and religions here,” Mathin says. “I just think it’s just not fair.”

The executive order banned travel from Iran, Iraq, Libya, Somalia, Sudan, Syria and Yemen. Going into effect immediately, it caused chaos throughout the country as immigrants with green cards and visas were stopped in airports. A federal judge in New York ordered a stay on the deportations for people with valid visas, but the country remains in a state of limbo, unsure of when the stay will be lifted.

On Jan. 30, UCF president John Hitt released a statement about the order, writing that the university was working with its international students to manage the school policy during the change.

According to Business Insider, UCF ranks fifth in the country in the number of student visas from the seven countries listed in the temporary travel ban, affecting 224 students who contribute an estimated $8.6 million to the university in tuition costs and fees.

UCF has set up an immigration website with updates from its immigration attorneys, Fragomen, Del Rey, Bernsen & Loewy, that students can contact for assistance.

The website states, “We value, respect, and appreciate the many contributions that our international students, scholars, and professionals bring to our UCF community. We are a stronger community because of you, and we believe in the values of diversity, inclusion, and community that make UCF a place where everyone can thrive.”

While Mathin says she’s never experienced discrimination at UCF before, as a Muslim American, she has experienced Islamophobia through dirty looks and hateful comments. She points out that governmental policies like these definitely feed into fear among Americans, an emotion she thinks shouldn’t even be there.

Mathin’s fellow club member Ali Khater, a junior majoring in physics, organized the march. He says that students have to stand up now, before they lose the right to speak out at all.

“Whenever an atrocity is committed in our country, we the people will always be there to stand up against the oppression,” Khater says. “We never want it to get to a point where we lose our freedom, where we lose the right to speak out against something we believe is wrong.”

For now, he says, it’s only seven Muslim countries, but what happens when the tables turn against another minority or ethnicity?

“In times like these, we’re all brothers and sisters, “ he says.

It’s a sentiment shared by other students on campus, who’ve banded together to start petitions to protect the immigrants in their community by making UCF a sanctuary campus.

Kyra Clark, a junior majoring in political science, started a petition on Facebook urging President Hitt and the university to take action and stand up and fight for the rights of immigrant students. So far, her petition has garnered over 800 signatures.

“The best way to fight this is to fight small, and UCF is a good place to do that,” she says.

A sanctuary campus is any college or university that adopts policies to protect immigrant students and staff, like not allowing Immigration and Customs Enforcement officers on campus without a warrant. It is modeled after sanctuary cities, something people in Orange County have been petitioning for Orlando to become.

Clark says that as an Indian immigrant who moved to America at age 2, she’s experienced prejudice before and doesn’t see how the country could go along with an executive order that seems so blatantly discriminatory.

“I don’t think people really understand the impact it has on a individual until they actually experience it,” she says.

Other students started petitions on campus as well. The Eleven-Nine Coalition, an organization formed after Trump won the election, and Knights for Socialism started a campaign to gather 1,000 signatures to give to administrators asking for UCF to be made a safe place for immigrants. 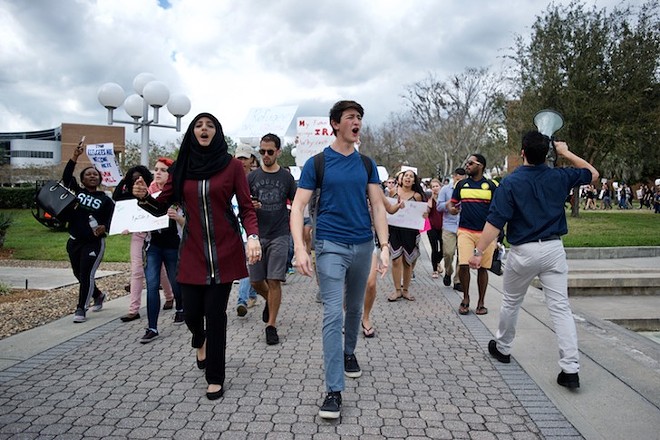 “UCF students are a part of our community regardless of what some papers say about their citizenship. They deserve the same opportunity to education as anyone else,” says Grayson Lanza, the Eleven-Nine coalition vice chair. “With the petition, we are trying to build power at UCF to organize, defend, and empower our community.”

However, not every student thinks turning UCF into a sanctuary campus is such a good idea.

Sergio Salano, a junior biotechnology major, started a counter petition urging UCF not to name itself a sanctuary campus.

He says that resisting ICE and other government agencies would just put the university at risk and might harm federal funding that the school receives.

“I do understand that the proponents are doing it out of honest concern, I just disagree with the strategy,” he says.

Instead of declaring sanctuary campus status, Salano says UCF should provide undocumented or immigrant students with legal aide and financial help instead.

While they disagreed about the right course of action, both sides concluded that college students have potential to help spark political change.

“College students have a huge voice that is underestimated a lot. These are people who will become teachers, doctors, politicians, activists, journalists, etc.,” Salano says. “Politicians need to realize that the number of college students is increasing, and they need to listen to their new and future constituents.”