Donald Trump will visit Mar-a-Lago again this Friday, for the third weekend in a row

Donald Trump, a man who claimed while campaigning that he would not be a president who took vacations, will return to the fabulous Mar-a-Lago resort in Florida for his third consecutive vacation this Friday.

According to the Palm Beach Post, a recent Federal Aviation Administration advisory states that Trump will be in Palm Beach Monday through Friday.

This is a good time to think back to 2015, about a week after Donald Trump announced his candidacy. While opening the Trump National Golf Club in Sterling, Virginia, Trump took a break from golfing to talk about how important it is, as a president, to be present at The White House and rarely take vacations.

Last weekend, Trump got his first taste of why he should probably heed his own advice and spend more time in Washington.

Instead of leaving the dining area, Trump and his advisors scrambled to figure out what was happening while guests at the club watched and took photos, reports CNN.

However, this apparently did not stop Trump from eating his dinner.


Even as a flurry of advisers and translators descended upon the table carrying papers and phones for their bosses to consult, dinner itself proceeded apace. Waiters cleared the wedge salads and brought along the main course as Trump and Abe continued consulting with aides.


One guest, Richard DeAgazio, captured this surreal event and posted it to Facebook. 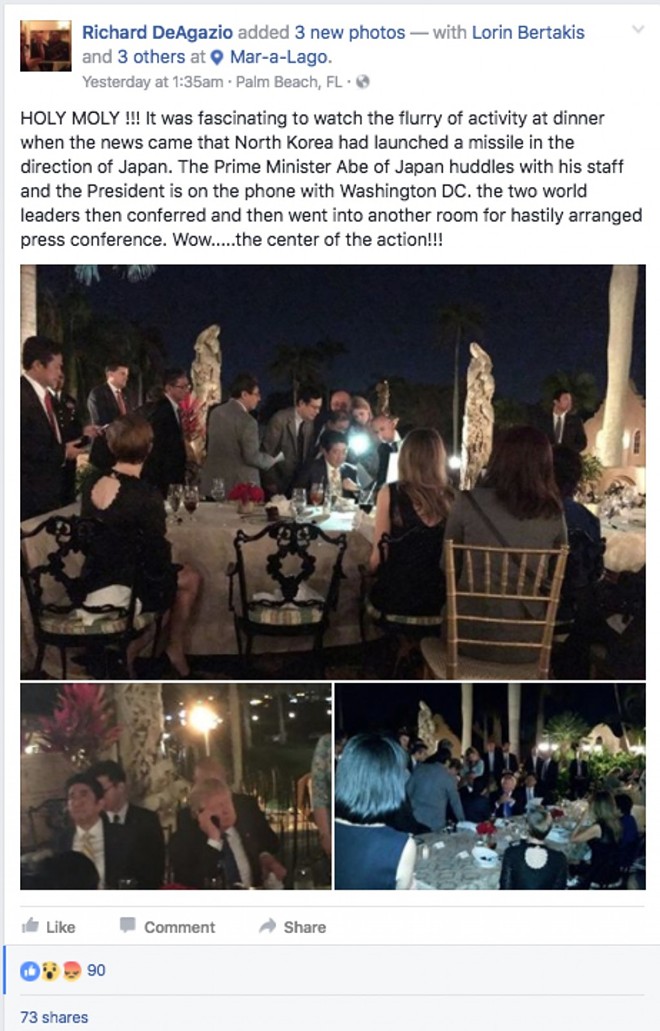 This is fine. Everything is fine.