Almost 100 people gathered in front of U.S. Sen. Marco Rubio's downtown Orlando office on Tuesday to bring him Valentine's Day messages demanding a town hall on a variety of issues, including the status of the Affordable Care Act, also known as Obamacare.

"He works for us," one woman says into a bullhorn as she leads the crowd into a chant. "We are his boss. We want Rubio. Not some guy that works for him in his office. I bet you they take our letters and they throw them in the trash when they get upstairs. We want Rubio in front of us. We want a town hall."

Protesters have consistently been outside Rubio's Orlando office at 201 S. Orange Ave. every Tuesday for weeks now, trying to get a response from Rubio on several of his votes, including a vote in January where Rubio joined his Republican colleagues for a budget resolution that let the GOP start dismantling ACA without the threat of a filibuster from Democrats. Rubio and other Republicans have not articulated a clear replacement to the health care law. Florida led the country in the number of people signing up for exchange, with nearly 1.8 million Floridians signing up for 2017 by the middle of last month.

Rachel Raum, from Clermont, brought her four children to protest in Orlando because she says she's taught her children they need to stand up to bullies. 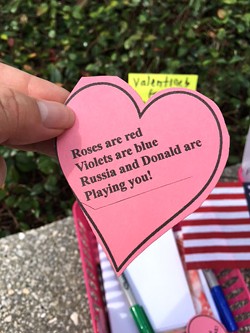 Melanie Gold says before President Donald Trump was elected back in November, she had never organized a rally or called her senators' offices. Now, the self-identified centrist has participated and helped organize at least four protests in the Orlando area since Trump's inauguration in January.

"I want to make sure we have our government represent us," she says. "Not a government that is dictated to us. That's what I'm very concerned about and those are the concerns that I hear. It's a mistake when people call it a left or right issue. I hear the same thing from Republicans, from centrists, from progressives and from Democrats."

Gold says aside from wanting Rubio to hold a town hall on Obamacare, protesters want Trump to release his tax returns and for an independent commission to investigate Russia's interference in the 2016 election.

"Look how frustrated people are because Rubio will not talk to them," she says. "He could actually alleviate a lot of this stuff in two ways: He could be the leader that he hoped to be when he said he was running for president and he could come out and say, 'This is what my agenda is for dealing in this administration. This is how I plan to be helpful to my constituents.' But he's not doing that."

Gold says more people are attending protests because they feel their voices aren't being heard by Rubio on issues like his vote in favor of appointing Betsy DeVos as education secretary, despite critics saying the billionaire was inexperienced and unqualified to lead the federal Department of Education.