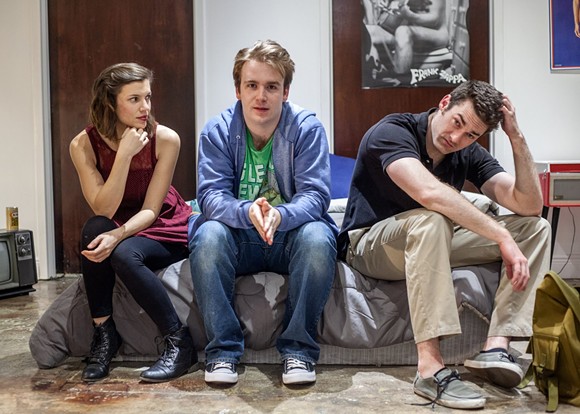 In the past couple of years, director/producer Jeremy Seghers has positioned himself as the White Rabbit of Orlando theater, leading audiences into a wonderland of weird and wacky venues – from a paint-splattered warehouse, to a musty barn, to a taxidermy-themed fetish club – in search of his intimate, immersive performances. Seghers’ latest, the local premiere of Kenneth Lonergan’s This Is Our Youth, is no exception, providing my first-ever opportunity to explore downtown Orlando’s historic Angebilt building.

After being greeted in the ornate lobby, patrons are ushered in a gilded elevator up to the ninth floor, where the Macbeth photography studio is serving as the scrappy Manhattan studio apartment of post-preppy drug dealer Dennis Ziegler (Jack Kelly). Dennis is passed out in bed, surrounded by ’80s-era pop culture detritus, when his pothead pal Warren (Austin Davis) wanders in with a backpack full of cash that he’s just burgled from his estranged father. Like a Beavis and Butthead for the Upper West Side set, the bumbling duo plot to invest their ill-gotten gains in a brick of Bolivian marching powder, in hopes of using the profits to get into the pants of Jessica Goldman (Monica Mulder), the fetching fashion student shy Warren has taken a shine to.

Between the privileged punks, purloined Benjamins, and a crap-ton of coke, what could possibly go wrong? Obviously, the answer is “anything and everything” in Lonergan’s debut script, which plays a bit like the cast of Freaks and Geeks rehearsing David Mamet. As always, Seghers does an exceptional job of placing the audience in the midst of a realistically lived-in environment, with seating surrounding the action on every side. When the boys start tossing a the pigskin around, you’d better stay sharp, because the audience is no safer from the flying football than the décor on Dennis’ shelves. Aside from serving as targets for pubescent violence, said décor – vintage turntable, tube television, rotary phone, et al – is essential for establishing the play’s 1982 setting, since with only a few edits the script could easily become a commentary on the dot-com bubble of the 1990s (when it originally premiered) or our current kleptocracy, instead of Reagan-era avarice.

As a critic, it’s challenging for me to separate the fine job done by Seghers’ cast in inhabiting their characters from the noxiously unlikable personas they portray, and the paper-thin plot they’re forced to play out. I experienced a smidgen of empathy for Warren, who seems to possesses a spark of intelligence buried beneath the bong resin, but utterly lacks a spine. There’s obvious chemistry between Davis and Mulder, but Jessica’s character is sketchily written, and their pair’s painfully awkward courtship seems doomed more by simple miscommunication than existential incompatibility. Dennis, however, is a character completely bereft of appeal, exuding unearned self-confidence while lacking any charisma that might counterbalance his creepiness. After an act and a half of navel-gazing and wheel-spinning, Dennis’ frantic finale freakout feels like an overblown acting exercise instead of honest self-examination.

If you are looking for an unvarnished slice of life exposing the soul-sucking shallowness of the 1 percent, Seghers and co. serve it up scalding hot, hold the sugar. But as someone who grew up among overindulged New York-area adolescents exactly like this, This Is Our Youth is no laughing matter, but rather a disturbing glimpse into an alternate life path that I’m deeply grateful I avoided.