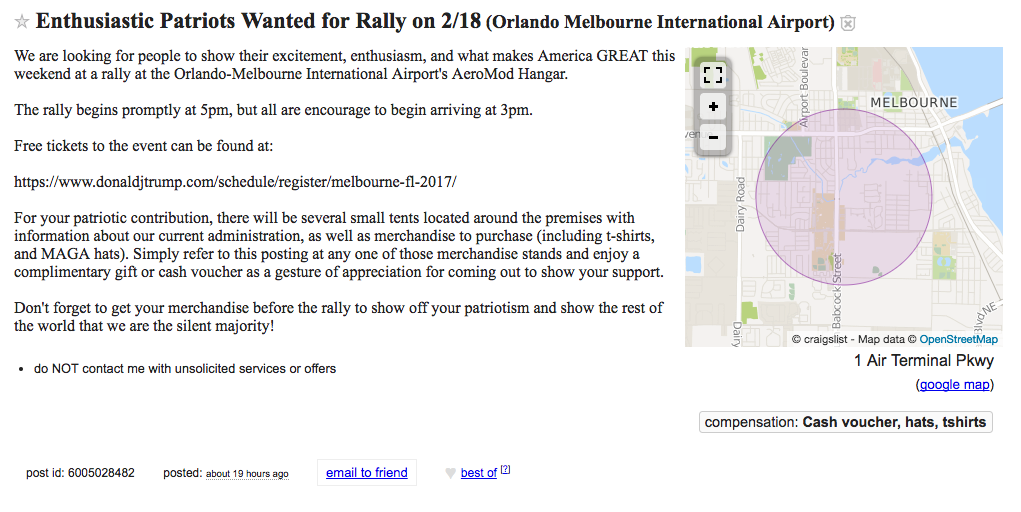 A recent Craigslist ad is offering to pay Trump supporters to show up to this weekend's rally in Melbourne, Florida, and more than likely it's fake as hell.

The ad, which was posted late in the day on February 15, calls for "enthusiastic patriots" to show up to the rally at Orlando Melbourne International Airport, and, as a gesture of appreciation for their support, to stop by "several small tents" to pick up a "complimentary gift or cash voucher."

First off, there have been a tremendous amount of unverified claims from both the left and the right that supporters/protesters are being paid to show up to political events. These claims have been made since the beginning of the last election, since Donald Trump descended down his escalator, and not one instance has been proven.

Of course, even our president loves to buy into these conspiracy theories...

Just had a very open and successful presidential election. Now professional protesters, incited by the media, are protesting. Very unfair!

However, in this case, overtly saying they're going to pay supporters with gift cards and cash vouchers, at a very public event, is so incredibly dumb it can't possibly be real–even for this administration.

Most importantly, it's impossible to know if this ad is real or fake without attending this Saturday's rally, which we will be doing. And if we see people getting paid to go this rally, we'll let you know. To be honest, that would be an amazing story.

But until then, this ad reeks of bullshit mostly because Craigslist has been the classic go-to for ads offering payment to political supporters or protesters, and every time they're fake.

The New York Times wrote a great piece about how fake stories, like this, go viral, and it's mostly because news outlets almost always take the bait. For example, the Orlando Sentinel mentioned this same Craigslist ad in a story earlier today, as if it's just part of Trump's visit.


Nevertheless, there is at least one attempt at getting Central Florida Trump supporters out to the rally, with a bit of enticement.

An anonymous ad on Craiglist [sp] posted Wednesday states “Enthusiastic patriots [are] wanted” to attend. “We are looking for people to show their excitement, enthusiasm, and what makes America GREAT this weekend,” the ad states. The ad also prominently mentions merchandise tents at the rally, stating that rallygoers can “simply refer to this posting at any one of those merchandise stands and enjoy a complimentary gift or cash voucher as a gesture of appreciation for coming out to show your support.”

The Trump campaign did not respond to a request for comment.

So, why even mention it now? We believe that you should be made aware of misinformation. Whether or not an ad like this reinforces your beliefs, or shatters your beliefs, it shouldn't matter. What does matter is that we don't let this garbage become normal dialogue.