A month into his presidency, Donald Trump campaigns for 2020 in Florida

A month after his inauguration, Donald Trump has decided he wants to keep president and kicked off his 2020 re-election campaign in front of thousands at a rally in Melbourne this weekend.

Without a political opponent, Trump has found a new enemy for himself and the American people in the media and started off by attacking journalists in front of an estimated crowd of 9,000 boisterous people.

"I also want to speak to you without the filter of the fake news," Trump tells the crowd. "The dishonest media which has published one false story after another with no sources, even though they pretend they have them, they make them up in many cases, they just don't want to report the truth and they've been calling us wrong now for two years. They don't get it...When the media lies to people, I will never, ever let them get away with it."

Trump, who filed his re-election papers on the day he was sworn in, paid for the event through his campaign, Donald J. Trump for President Inc. The New York Times reports White House officials said Trump would not be using Air Force One "in the background as a prop," but on Saturday, Trump rolled into a hangar at the Orlando Melbourne International Airport on the iconic blue-and-white plane to the soundtrack from the "Air Force One" movie and later emerged while "God Bless the U.S.A" loudly played on the speakers.

After a tumultuous month in the highest office in the land, Trump got the adoration he craved through his supporters, who joined him in disparaging reporters by booing at them and shouting "CNN sucks!" The president even invited one of his supporters on stage and called him "a star."

"We the people, our movement is the reason why our President of the United States is standing here in front of us today," supporter Gene Huber tells the crowd. "When President Trump during the election promised all these things that he was going to do for us, I knew he was going to do this for us. Thank you so much, sir."

During his speech, Trump defended his controversial ban on immigration from seven majority-Muslim countries and attacked the judges who blocked his ban.

"I've taken decisive action to keep radical Islamic terrorist the hell out of our country," he says. "...I listened to these judges talk and talk and talk. So unfair. So we'll be doing something over the next couple of days. We don't give up. We never give up."

The president didn't address any of the more recent controversies surrounding his office, including the resignation of National Security Adviser Michael Flynn for misleading the vice president and White House officials about his conversation with Russia regarding American sanctions in December, according to the Times. Instead, Trump told the crowd, "The White House is running so smoothly, so smoothly."

After assailing Democrats and promising to "drain the swamp," Trump also discussed his infrastructure plan and reiterated his promise to repeal Obamacare and replace it with a better health care policy, though what that would be is still unclear. Trump's final words called for unity in the country.

Outside, though, the crowds gathering before the rally were less than united. On one side of Apollo Boulevard, hundreds of people protested Trump and his policies, while his loyal supporters mostly stayed on the other side of the street and yelled, "You lost! Get over it! Get a job!" Some of Trump's supporters screamed that protesters were paid and gave the middle finger to the crowd across the street who chanted, "Hey hey! Ho ho! Donald Trump has got to go!"

Elizabeth Faiella, of the group "We Are The Perfect Storm," says she drove all the way from Orlando to protest in front of Trump's rally.

"We are working for all human rights now, which are under threat by this president," she says. "I'm here, and I'll be anywhere I can to teach young people what's happening and protest this crisis.

Faiella says she's turning 70 this year and has never been so worried about America's democracy. 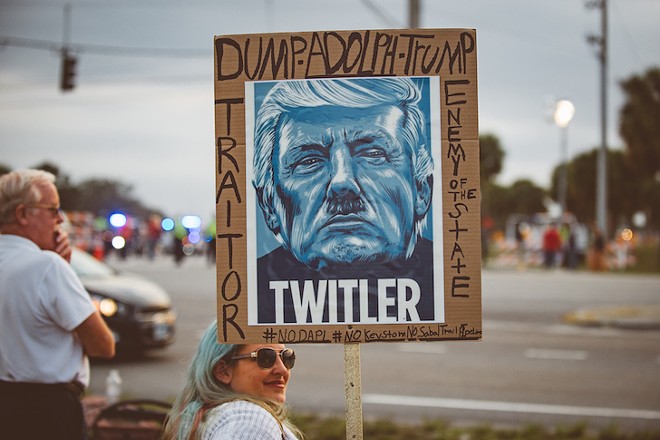 The night ended with more clashes between Trump supporters and protesters after the rally, so much so that local police put a line of squad cars in between opposing camps.