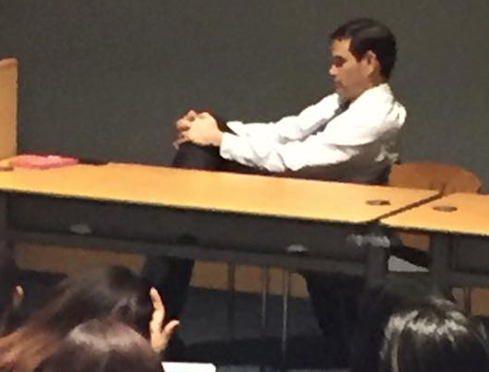 U.S. Sen. Marco Rubio is really having a terrible day.

After his aides told media outlets Rubio wouldn't be planning any town hall meetings in Florida during the congressional recess because he was going to Europe, the Republican senator was spotted at Miami's Jackson Memorial Hospital on Thursday avoiding a protester who asked him why he wasn't showing up to citizen-organized town halls, including one held last night in Tampa and one planned for Thursday in Miami.

After that small snafu this morning, Rubio probably thought he was in the clear. Alas, no. A video posted online shows protesters followed the senator to a class he teaches at Florida International University to yell at him some more on Thursday.


The video, recorded by FIU sophomore Lai Eng, shows a group of protesters yelling at Rubio in the classroom, with one man shouting, "Is he going to cut Medicaid? Is he going to cut Medicaid?!" Eng, who is a political science and international relations student in the class, says the protest started after the class ended, when students rushed around Rubio to take photos with him.

Protesters then came in to talk to the senator about health care reform and handed him a large blank check that included issues such as social security and the environment. Dario Moreno, an associate professor at FIU, teaches the politics class along with Rubio. He is heard on the video telling protesters, "This is a class. These are his students … You're interrupting the class."

Meanwhile, Rubio can be seen trying to engage with demonstrators and answering their questions about health care reform.

"I want you to be able to control your health-care spending, and use it to purchase any kind of health insurance you want," Rubio tells a demonstrator. "If you don't have enough money to pay for it on your own, then you get a tax credit."

At one point, one of the protesters tells Rubio he is very articulate on the issue of health care reform and should hold a town hall.

"You don't want a town hall," Rubio tells him, shaking his head. "You want to go to a place where you can scream."

After some more debate, Rubio spends the last three minutes of the first video taking photos with students. In another video Eng posted online, she is seen confronting Rubio about his support for President Donald Trump's nomination of Education Secretary Betsy DeVos.

"Since I am a student and constituent of his I felt as though it was important to voice my concern over public education," Eng says. "He has some nerve stepping foot on a public university after accepting money from Betsy DeVos, who does not favor public schools. It was a healthy debate and he should be representing his constituents' interests, not his own."

Protesters have been asking Rubio to schedule a town hall for a couple of weeks now. While some of them do appear to have met with Rubio's staff in different Florida cities, the senator has not scheduled a town hall meeting that the public can attend. Citizens decided to organize their own town halls this week and invited Rubio to attend, though he declined.

"The protesters – some of whom failed to show up for meetings they scheduled with our staff – continue to fundraise off of it even though we informed them days ago Senator Rubio will not be there," Wolking says in an email to Orlando Weekly. "We have been fully accessible and responsive to constituents, and our staff has already met with dozens of these liberal activists at our offices across Florida. As their manual reveals, their goal is to stage a hostile atmosphere, record themselves booing no matter what is said, and refuse to give up the microphone. That is not a true or constructive dialogue."

Wolking is referring to an online activist manual created by the group Indivisible that advises constituents to be polite but demand answers during town halls, which may include booing congress members who don't give real answers. Sarah Dohl, a spokesperson for Indivisible, says it's the job of elected officials to listen to their constituents, even if that may sometimes involve criticism. Melissa Gallagher, an organizer for the town hall in Tampa, told OW she was not affiliated with Indivisible or any other activist group. She, like a growing number of Floridians, just wants her senator to hear her.