Wow, look at this deal on bottle service 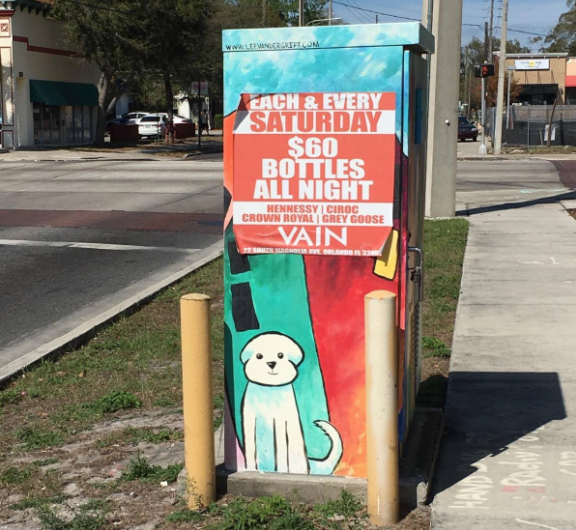 Whoa! $60 for bottle service at Vain Nightclub?! Damn. It's just extremely unfortunate these posters were slathered over local art installations.

The poorly placed ads were found on at least two installations in the Mills 50 area this week (and pretty much all over Orlando), but despite the deal, people are not happy.

Especially the official Mills 5o district Facebook account, which was understandably less than pleased. "They say 'a picture is worth a thousand words!' I can think of a few choice words to describe this destruction of public art in Mills 50 District!" said a recent post.

Posters like this are difficult to remove without damaging the paint, so whether or not the art underneath is permanently ruined is yet to be seen–but more than likely it is.

It's uncertain if the ads were knowingly placed over these art installations, or if someone affiliated with Vain or a third party (like a promotional company) is to blame.

We've reached out to Vain Nightclub and will update this story when more information becomes available.