A recent study from United Way shows that 45 percent of households in Florida and 43 percent in Orange County, still find it nearly impossible to obtain even the most basic necessities, and the numbers show the problem is only getting worse.

Despite being employed, according to United Way, many of these households are still unable to pay bills, afford health care, housing, transportation and essentially are one accident away from sliding into poverty. This is what we call "working poor."

The study shows that the federal poverty level, which is currently at $24,250 for a multi-family household, fails to fall even come remotely close to the estimated $55,200 needed to provide for a family of four in Orange County.

In 2015, 67 percent of all jobs in Florida payed below $20 per hour and three quarters of those made less than $15 an hour. This will surely worsen as low-wage jobs are projected to grow faster than higher-waged ones.

The study suggests that 3.3 million households across Florida can be labeled as working poor homes. That's 45 percent of the state population. Compare this to the 2.6 million woking poor tallied in 2014 and the cause for concern becomes apparent. 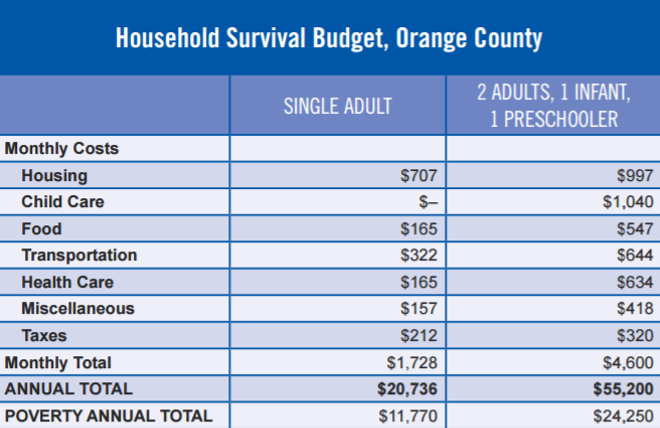 In Orange County, the study shows that a single adult needs to make at the very least $1,728 a month, whereas a household of two adults, one infant and one preschooler will need $4,600 monthly.

The noticeable figure here is the minimum number needed for childcare, which is set at $1,040 a month for a multi-person household. On a related note, infant daycare in Orlando is more expensive than college tuition.

"While we need jobs, because jobs keep people out of poverty, we need better jobs," said Lars Gilbert, the Director of Florida's ALICE program. Gilbert suggests that what is needed is more full time opportunities with the chance of upward movement and career growth.

"This impacts our education, our health care system, our jobs our credit and our ability to grow our home sector" said Gilbert.

Since 2007, Florida's median income has dropped 12 points and having an abundance of low paying jobs doesn't help. Last year, a report from the U.S. Bureau of Labor Statistics showed that Florida has the lowest paying jobs in the country, which is something you won't hear Gov. Rick Scott brag about in a tweet.