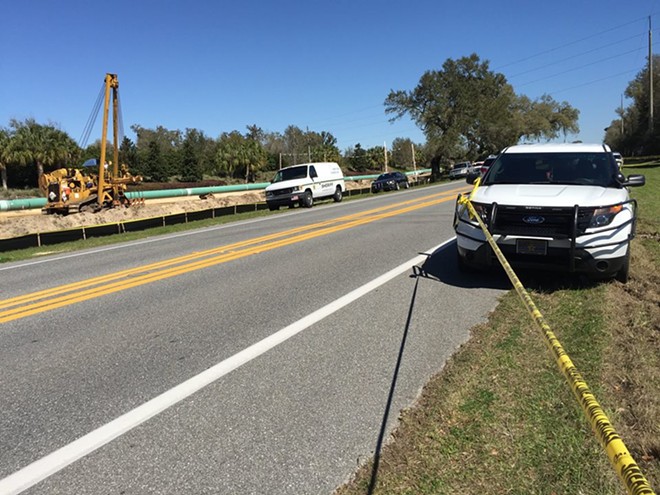 A suspect accused of using a high-powered rifle to shoot at a piece of the Sabal Trail pipeline in Dunnellon was shot and killed by local law enforcement officials after a car chase this weekend.

The Marion County Sheriff's Office said its deputies responded to the pipeline around 9 a.m. on Sunday after reports that a man was using a high-powered rifle to shoot at the pipeline and surrounding equipment. When deputies arrived, the suspect, who officials have not identified, fled into neighboring Citrus County.

The Citrus County Sheriff's Office said its deputies and troopers from the Florida Highway Patrol began pursuing the suspect on Highway 200 until they reached an area near Floral City.

The Gainesville Sun reports that an FHP official performed a "PIT maneuver" with a squad car that supposed to stop the fleeing pickup. The suspect's truck crashed into an embankment on the side of the road. Marion County and Citrus County officials both said the suspect was "involved in a crash." Law enforcement officials said the suspect got out of the car and then "brandished a weapon" at deputies and troopers. Officers shot and killed the man, though it's unclear who fired the fatal shot.

The suspect's identity is being withheld until officials notify the next of kin. The Marion County Sheriff's Office says the Florida Department of Law Enforcement will be investigating the shooting, and no officers or residents were injured as a result of the incident.

"We know that the suspect was armed and extremely dangerous, and pending the examination of the evidence at the scene, we will be able to determine what other weapons he had in his possession at the time of the shooting," Citrus County Sheriff Mike Prendergast said.

Last week, two protesters were arrested for climbing inside the Sabal Trail pipeline that's scheduled to start operating in June. The pipeline, a $3.2 billion project of Houston-based Spectra Energy, is supposed to snake 515 miles through Alabama, Georgia and down to Central Florida to connect with a compressor station near Reunion and a smaller pipeline through the Kissimmee and Hunter's Creek areas. The pipeline tunnels under the state's natural environment to transport 1 billion cubic feet of natural gas every day. Energy companies say Sabal Trail will bring affordable natural gas to Florida, while advocates worry it could jeopardize the state's clean water source and environment.