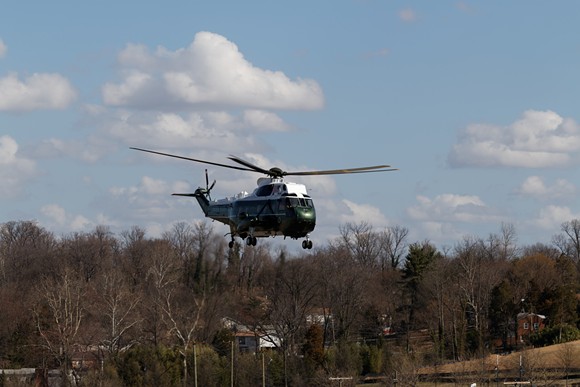 In order to make his Florida golf outings slightly more convenient, a large dirt pit at Donald Trump's Mar-a-Lago resort in Palm Beach will soon be a functioning helipad for the Marine One helicopter.

The 40- or 50-foot pit was spotted Tuesday with orange cones surrounding it. See the bottom right corner of the photo below.

So far, there's no word on how much this helipad will cost or who is paying for it.

The new helipad will allow Trump, who has literally spent his first four out of five weekends as president here in Florida, to fly in Marine One from the Palm Beach International Airport to Mar-a-Lago without his motorcade jamming up traffic.

However, according to the Palm Beach Post, using the presidential helicopter does not mean the Secret Service will stop shutting down all roads surrounding Mar-a-Lago and the Southern Boulevard Bridge while Marine One is in the air.

So, really this helipad doesn't do much in terms of alleviating local traffic issues. It also doesn't help take any pressure off the local airports. A couple of weeks ago, U.S. Sen. Marco Rubio mentioned that Trump's frequent trips to Mar-a-Lago are costing Palm Beach airports nearly $215,000 every time he visits.

Happy #Florida & #WPB home to #WinterWhiteHouse But need to deal burden with burden it's imposing on local govt https://t.co/20WLK72Xlv


Not to mention that the head of the Lantana airport, which is the 10th busiest "general aviation" airport in the country, said last February that Trump's visits will "kill this airport."

But hey, the golfing is great at Mar-a-Lago.