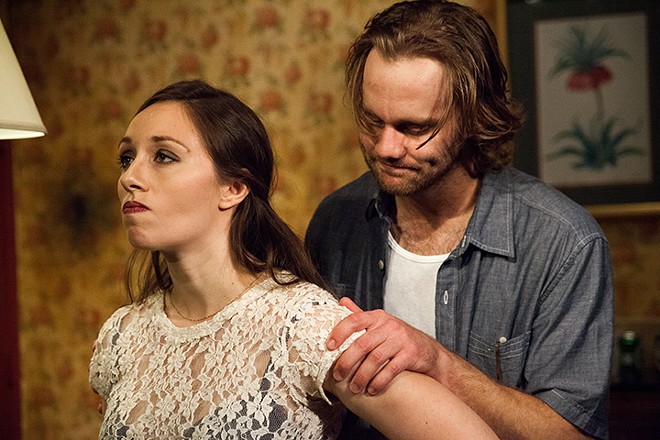 Theater on the Edge, an outgrowth of the Meisner-focused Truthful Acting Studio school, seemed to explode onto the local theater scene last year with two well-received productions: David Ives’ Venus in Fur and David Mamet’s American Buffalo. Their newest production follows in the same vein of tough, serious plays that depend heavily on capable actors to carry them. In Tape, by Stephen Belber, two old high-school buddies, Vince and Jon, meet up in a seedy motel room for an impromptu reunion. Vince (Zack Roundy) is essentially a fuck-up: unable to hold down any job that doesn’t involve selling drugs. Jon (Joey Ginel), on the other hand, is a film director whose career is just starting to take off. But after Jon confesses to date-raping a mutual ex-girlfriend, Amy (Megan Raitano), Vince reveals that he’s taped their conversation and that Amy is on her way over to the motel room. What follows is a tense treatise on regrets, revenge and the elastic nature of memory with dialogue that rivals even Mamet’s snappiest banter. It’s the type of play that actors dream of; judging by Theater on the Edge’s reputation, they should be able to nail it.