The Orlando tourist district is about to get a huge new shopping center, and possibly a new I-4 interchange 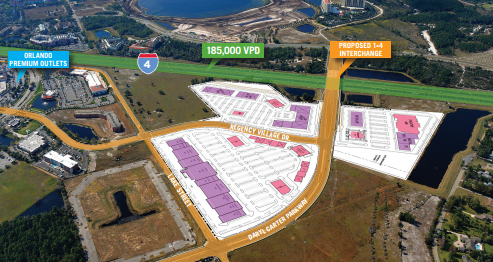 Just as one area mall () closes, details of a new shopping center are now surfacing. closed the majority of its stores earlier this year, but we have new details on where two of them are going, and one is heading to a massive new commercial development.

Book Warehouse is heading to the Lake Buena Vista Outlets on 535 and Boot Barn is heading to a new commercial development on Daryl Carter Parkway. In documents shared with Orange County ahead of county approval, details show how the nearly 70-acre plot (at the intersection of the new Daryl Carter Parkway and Regency Village Drive) will become a massive 447,500-square-foot commercial center known as Vineland Pointe.

Located just north of the Orlando Vineland Premium Outlets, Vineland Pointe will be the first major development on Daryl Carter Parkway. Eventually, the parkway will extend to Apopka-Vineland Road and will include a massive new 3,500-student, up to 6-story, urban format high school, a 360-home luxury housing development, and possibly a new interchange on I-4. Another 15-parcel commercial development overlooking I-4 is planned just north of Daryl Carter Parkway on Palm Parkway. But by far the biggest development in the works for this area is the Vineland Pointe one, though there are still a few major plots up for sale in the immediate area.

According to GrowthSpotter, Vineland Pointe will be developed in three phases with major tenants as part of each. Among the tenants planned are the Habit Burger and Grill, West Marine, Meson Sandwiches, Cheddar's Scratch Kitchen, Cheesecake Factory, Total Wine and and Noble.

Along with the restaurants and retail, Vineland Pointe will also bring new entertainment options to the area, including the Orlando area’s first Lucky Strike bowling alley and a yet-to-be-named movie theater brand.

With AMC having two major theaters nearby it’s likely not them, and Pointe Orlando already has a Regal not that far away. Two possible theater tenants are Cinemark, which currently has a theater at , or Epic, a Florida-based theater chain which has been expanding throughout the region. An for a future hotel was also included in earlier versions of the plans, but the most recent plan does not include the hotel site. Overall the proposed commercial development has shrunk by roughly 100,000 square feet from its original size but includes a similar layout.

The Vineland Pointe proposal will go before the Orange County Development Review Committee on Wednesday, March 8, as part of a multi-step approval process.

Vineland Pointe is currently planned to open in late 2017/early 2018.

UPDATE: As always, remember that the tenant list can change at any time. These are only the tenants as listed in documents shared with the county and GrowthSpotter.