Here's how to record your Pulse experience with StoryCorps 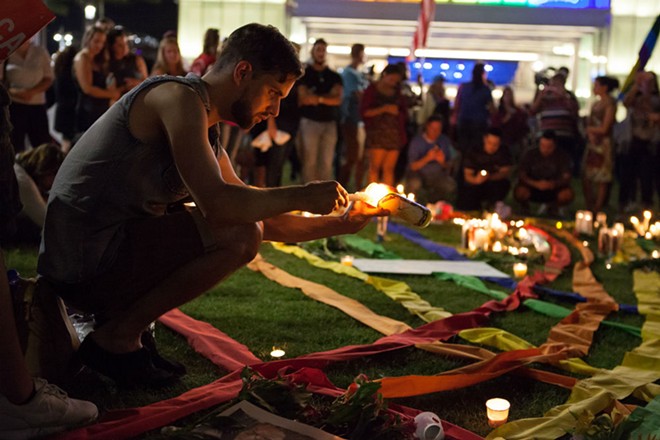 StoryCorps, a New York-based project that travels the country recording humanity's stories, is in Orlando this week in partnership with 90.7 WMFE to record how you were affected by the June 12 mass shooting at the gay nightclub Pulse where 49 people were killed and countless others were injured.

StoryCorps says all its interviews are archived at the American Folklife Center at the Library of Congress in Washington D.C. There's a couple of ways you can record your story for the "Taking Your Pulse" project, depending on how you were affected by the tragedy.

If you were directly impacted by the massacre (this includes survivors, friends and family of victims, members of community organizations who helped in the aftermath, LGBTQ+ and Latino allies), then StoryCorps producers want to hear directly from you. They'll be here from March 9 to March 11 to record stories and there are limited spots. If you would like to be considered for an interview, you can email them here or email their partner Family Equality Council here.

If you were indirectly impacted by what happened at Pulse and want to share how it changed you, you can do that in several ways. First, you can book an appointment on the WMFE website at one of several locations across the county. The recording locations include the WMFE studio and Orange County Library System locations, including the Orlando Public Library in downtown. You can schedule an appointment from March 6 to March 11, and OCLS spokesperson Erin Sullivan says there's many available time slots. For these appointments, you have to bring somebody else to interview you. If you've ever heard a StoryCorps interview, then you know it's more of a conversation, usually between two people who know each other.

Sullivan, who's helped others participate in the Taking Your Pulse project at the library, says it's helpful to have some questions ahead of time, like "How de we know each other?" or "Where were you when Pulse happened?" to break the tension and get a smoother flow in the recording.

People indirectly affected can also record their stories from the comfort of their own home through the StoryCorps mobile app, available on Apple and Android. After you finish recording through the app, you can share it with the Taking Your Pulse community here. Sullivan says it's helpful to get acquainted with the app before you start recording. If you need more help, click here.