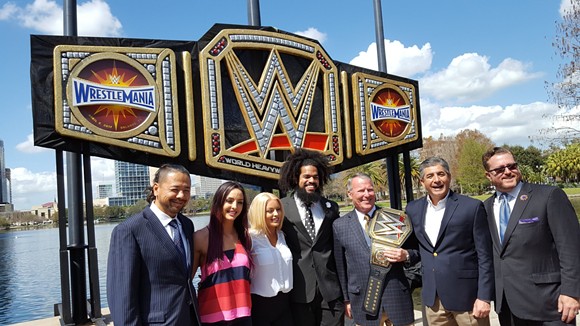 This morning, Orlando Mayor Buddy Dyer unveiled a massive WWE championship title belt that will be on display at Lake Eola through WrestleMania.

"As you can see I like to accessorize," said Dyer, before showing off the 12-foot tall piece of landscape bling.

Dyer went on to say that WWE fans are encouraged to take photos of their "best superstar pose" in front of the big-ass belt and share their photos to social media with the hashtag #WrestleMania.

The weekend of WrestleMania, Orlando will also host a fan festival called Axxess at the Orange County Convention Center and the 2017 WWE Hall of Fame induction ceremony at the Amway Center.