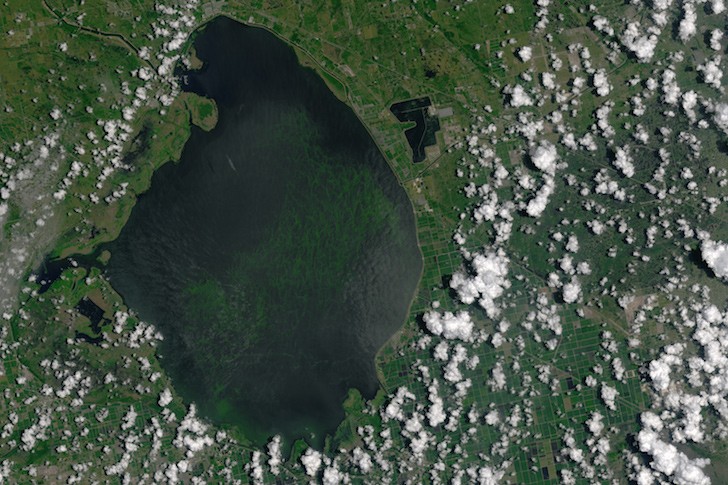 A controversial plan to speed construction of a 60,000-acre reservoir on farmland south of Lake Okeechobee —- to reduce the risk of more "guacamole-thick" water appearing in Treasure Coast communities —- was expanded Wednesday to include water projects in other parts of the state.

And the measure (SB 10), now called the "Coast-to-Coast Comprehensive Water Resource Program," might not be done growing, its sponsor said.

But concerns continue to linger that the initial proposal would "devastate" economically challenged inland communities south of Lake Okeechobee at the expense of wealthier coastal areas.

Belle Glade City Commissioner Johnny Burroughs, Jr., said lawmakers need to take into account that people who could be impacted by reduced farmland already suffer the effects of polluted water.

"I hope that this process can be held in a manner so we will not be decimated, as someone is concerned about algae in their area, when we live on the lake," Burroughs said. "Who do you think would have the biggest algae issue?"

The reservoir proposal, which is a top priority of Senate President Joe Negron, is aimed at reducing polluted water releases from the lake into estuaries to the east and west. Negron has repeatedly described "guacamole-thick algae blooms" deeply impacting waterways across his Treasure Coast district.

In an effort to draw more legislative support, the measure now includes water projects related to the St. Johns River, the Indian River Lagoon and the Florida Keys and would expand the ability of wastewater-treatment facilities to recycle water.

Senate Environment and Natural Resources Appropriations Chairman Rob Bradley, a Fleming Island Republican who is sponsoring the bill, said the changes were in response to comments from other senators and that he could see more water projects added as he gets additional "feedback."

"I think that we need to do a better job as a state in dealing with water resources," Bradley told reporters after the meeting. "We need to do a better job and it needs to be a statewide concern of dealing with water resource issues to make sure that we have sufficient resources for our families and our businesses, to make sure we have sufficient resources to grow food, and to make sure that these springs and rivers we have been blessed with by God don't dry up because that would not be fair to future generations to do so.”

Bradley's subcommittee voted 5-1 to approve the amended proposal Wednesday. But the bill remains divisive as opponents argue it is a possible job killer for the agricultural industry south of the lake, could delay scheduled projects lined up for Everglades restoration and would put the state into long-term debt. Opponents also include the state's politically influential sugar industry.

The changes made Wednesday increased the bill's potential price tag to $3.3 billion, of which the state anticipates the federal government would cover $1.2 billion in a 50-50 split on the reservoir.

Negron and Bradley proposed paying for the state's portion of the reservoir through money that Florida voters directed in 2014 to be used for water and land conservation. The proposed projects would find extra dollars through the Florida Forever program. The bill also anticipates issuing bonds.

But House leaders have repeatedly expressed opposition to increasing the state's long-term debt through bonding.

"If I felt like there was a compromise that was not going to devastate, along with (providing) real true economic development in the Glades, I could go with that. But we're not there yet," said Braynon, who cast the lone vote against the bill Wednesday. "Nobody wants to see a fisher lose his job, nobody wants to see a farm worker who picks sweet corn losing their job, none of that has to happen, if we work together."

Opponents of the bill also argue that the state needs to consider other projects, such reducing pollutants that come into the lake from the north and converting residents from septic systems to sewer.

But some supporters of the reservoir contend the impact of the algae blooms on the tourism industry should be the priority.

The amended bill would keep Negron's initial proposal in place, while adding $35 million a year for the St. Johns River, its tributaries or the Keystone Heights lake region in North Florida, as well as $2 million annually for a number of wastewater and conservation efforts across the Florida Keys.

Bradley's proposal would also ask the U.S. Army Corps of Engineers to speed up repairs on the Herbert Hoover Dike around Lake Okeechobee and requests that the state Department of Environmental Protection establish a water-reuse grant program for wastewater treatment facilities. It also would add $20 million for Gov. Rick Scott's request to help property owners along the Indian River Lagoon and the St. Lucie and Caloosahatchee estuaries move from septic tanks to sewers.