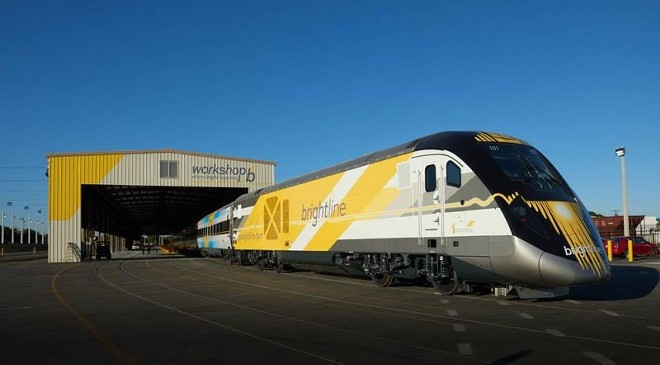 The West Palm Beach-to-Orlando leg of the passenger train service Brightline, formerly known as All Aboard Florida, has announced another delay. (This story has been updated to include a comment on the construction timeline from Brightline; see end of story.)

This comes just months after Martin and Indian River counties filed federal lawsuits attempting to block the bond-based financing that Brightline planned to use to help finance the rail.

According to the South Florida Business Journal, the latest delay means the private passenger high-speed train service from Orlando International Airport to Miami is 2.5 years behind its initial opening date.

The first section of the South Florida leg of Brightline, running between West Palm Beach and Fort Lauderdale, will open in late July, with the link to Miami opening by this fall.

The nine-acre Miami station, now under construction, will feature an on-site hotel 800 residential apartments with trains arriving via an elevated track nearly 50 feet in the air. The area below the station will become a new retail center.

The leg has been plagued with many more difficulties than the West Palm Beach-to-Miami leg, where Brightline parent company Florida East Coast Industries owned many pre-existing tracks. The Orlando leg will include a 40-mile section where new rail must be laid. That section will run alongside the Beachline before connecting to pre-existing tracks near Cocoa. The Orlando station will be in the now-under-construction terminal at the Orlando International Airport.

Brevard County has been pressuring the private train service to add a stop in the county that could service county attractions, such as Melbourne, Port Canaveral, Cocoa Beach and Kennedy Space Center. Brightline has been extremely reluctant to add the new station, a move that could cause Port Canaveral to lose cruise passengers to South Florida cruise ports, which will be easy to access from nearby train stations.

Last week Brightline announced a shake-up in leadership when sports and entertainment insider Dave Howard was named CEO. Brightline President Michael Reininger will shift to leading new development and growth opportunities for the Florida-based passenger rail company. Reininger explained that the leadership transition is due to the shift from building to customer operations.

Former rail systems planned for Florida (and blocked by Gov. Rick Scott, despite funding being nearly completed in one of his first major decisions as governor) included stations in Daytona Beach, Jacksonville and Tampa, among others.

Florida East Coast Industries owns numerous rail lines in the state, including a line that Henry Flagler developed over a century ago along Florida’s east coast.

"There is an unprecedented opportunity to replicate the remarkable success Brightline has built over the last five years in many other places," said Wes Edens, co-founder of Fortress Investment Group, in a press release. "We have proof of concept for delivering private-sector led transportation projects that can be created efficiently, quickly and profitably. As we see the impact of Brightline take hold in Florida, we're going to look to translate our success across the country."

Financing for the leg has to be secured, in part due to the Department of Transportation changing the bond approval it had initially approved in 2014. The change in approval may mean the lawsuits filed by Martin and Indian River counties are no longer legitimate.

“I find it quite astounding that Florida does not have any measures in place to address high-speed rail when there is a statewide project underway that will crisscross through my community, many others between Miami and Orlando, and potentially up Florida’s entire east coast,” said Sen. Mayfield in a public statement. “I can tell you that to date I have not heard one thing from AAF about what they are going to do to ensure safety features are in place to protect the public around these fast-moving trains. This legislation is designed to protect all Floridians from accidents and injuries at these dangerous railroad crossings across the state.”

In a statement announcing the bills, Brightline’s second phase through Martin, Indian River, and Brevard counties are specifically mentioned. The announcement says “Brightline, in the Treasure Coast region, threatens to put at risk thousands of school children, pedestrians, first responders, and residents who would be forced to cross railroad tracks between 110 mile-per-hour trains multiple times per day.”

The bills call for Positive Train Control and Remote Health Monitoring of train tracks, along with fencing on both sides of the track in areas that the bills deem necessary, installation or realignment of crossing gates, and other safety measures.

With the original funding now in question, and Florida Republicans once again attempting to create more difficulties in blocking higher-speed rail for the state, the 2.5-year delay for Brightline may grow even longer before we finally get a station here.

At least we’ll have all the new flights from the MCO terminal, so we can always just fly to Miami instead.

UPDATE: Brightline spokeswoman Annemarie Matthews contacted us to correct our original description of the Miami station as having an on-site hotel; it will instead have 800 apartments, as updated above. She also said, "We have been very focused on launching Phase I of the service from Miami to West Palm Beach. Now that we are readying for service launch, we are continuing to make progress on Phase 2 to Orlando. We are currently finalizing permitting and should have a better idea of timing to Orlando after we begin operations this summer."