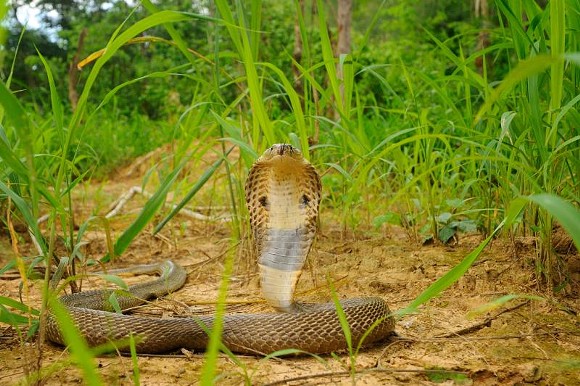 For the second time in two years, authorities are again searching for a deadly cobra that has gone missing in Central Florida.

According to the Florida Fish and Wildlife Commission, a yellow monocled
cobra, which is one of the most deadly snakes from Thailand, escaped from an enclosure at around 9 p.m. last night, near the 900 block of Northeast Fifth Street in Ocala, Florida.

"Residents in the area are urged to use caution until this snake has been captured," the FWC said in a statment. "Although reclusive by nature, cobras are highly venomous and will strike out if they feel threatened."

The owners, who had a legal permit to own the snake, believe it may have been eaten by one of their many large lizards. However, tests performed on a lizard with a larger-than-normal stomach came back as "inconclusive," reports the Ocala Star Banner.

According to the Star Banner, an apprentice was watching the snake and accidentally let it out while protecting himself with a shield.

From the Star Banner:

Police officials were told that a man was shadowing the owner of the cobra so he could get his license to handle poisonous/venomous reptiles and snakes. The man was at the home while the owner was at work.

The apprentice did not see the cobra in its confinement area so he tried different tactics to get the snake to move around. The man then got a shield and lifted the top cover of the snake's cage. The cobra jumped at him – almost standing straight up – and then slid away. The man made sure the room was secure and called the owner.

This isn't the first time a large and very lethal snake has gone missing in Central Florida. Back in 2015, an 8-foot king cobra named Elvis went missing for nearly a month from Mike Kennedy's Dragon Ranch in Orlando, only to be found under a neighbor's dryer.

Anyone with any information on this particular missing snake is encouraged to contact the FWC’s Wildlife Alert Hotline at 888-404-3922.