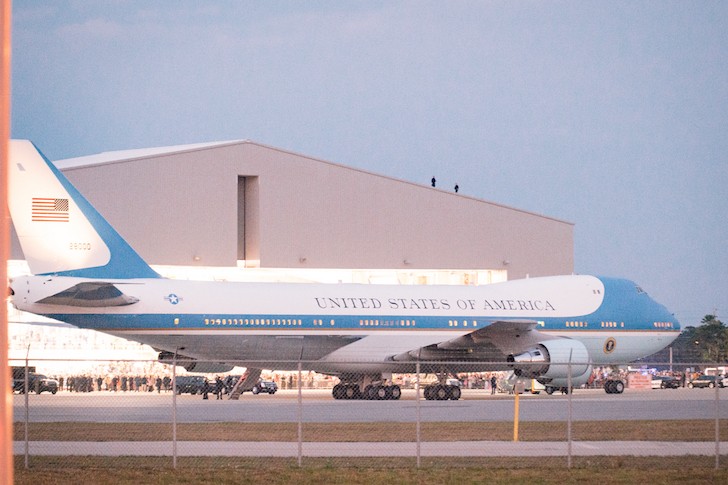 President Donald Trump has a long, well-documented history of petty lawsuits with Florida airports, which might explain why he doesn't care if they're struggling due to his weekly golf trips to Mar-a-Lago.

This weekend, like almost every weekend since his election, Trump will be flying from Washington, D.C., to the plush Florida resort he affectionately calls his "Winter White House."

These frequent trips not only cost taxpayers millions in overtime for local law enforcement, they also force the Secret Service to put in place strict flight restrictions that cripple nearby airports. It's safe to say this does not bother Trump at all.

Three things we already know: 1) Trump loves his private resort; 2) he hates planes flying near it; and 3) he is petty as hell, and files an incredible amount of frivolous lawsuits. (More than 4,000 are active right now.)

Over the past two decades, Trump has filed numerous lawsuits with Palm Beach County regarding planes flying too near his resort. According to the Sun Sentinel, these lawsuits have cost taxpayers an estimated $600,000.

It's important to remember that Mar-a-Lago is Trump's baby. He bought it in 1985 from a Post cereal heiress and restored it to the glorious National Historic Landmark it is today. Since the day it opened, Trump has always hated noisy planes that fly overhead.

I like to imagine Trump, wearing nothing but a white spa robe, waving and screaming like a madman while a plane buzzes over his golf course. But now, with his new presidential title, Trump finally has the authority to keep these damn planes from flying over and near his resort.

Mar-a-Lago is just 2.5 miles from the Palm Beach International Airport, which has been the primary focus of Trump's disdain from the day his resort opened its doors.

In 1995, Trump filed a lawsuit claiming that the "noise, vibrations and emissions from airport traffic have been damaging the oceanfront estate," reports the Sun Sentinel.

This lawsuit was settled in 1996, with the county agreeing to work with the FAA to reroute noisier planes away from Mar-a-Lago. A settlement from this lawsuit gave Trump the ability to lease a 250-acre plot from the county, where Trump later built the Trump International Golf Course.

In 2010, Trump filed another lawsuit, this time unsuccessfully, to stop the Palm Beach International Airport from building a second commercial runway.

And finally, Trump filed a third lawsuit in 2015 for $100 million in damages, arguing that planes were "creating an unreasonable amount of noise, emissions and pollutants at Mar-a-Lago," and claiming local officials pressured the FAA to direct planes to PBI over his resort in an effort to "seek revenge by attacking Mar-a-Lago from the air."

I like to imagine Trump, wearing nothing but a white spa robe, waving and screaming like a madman while a plane buzzes over his golf course. tweet this
Of course, once Trump won the presidency, he then dropped the "malicious act" portion of the lawsuit, because, well, he finally got the no-fly zone he always wanted. The only part of the lawsuit that remains is Trump's argument that the flyovers from the county's airport create an unusual nuisance.

Which brings us to the Lantana Airport, a smaller county airport about six miles south of Mar-a-Lago. The airport hosts 28 local businesses, which have felt the tremendous impact of Trump's near-weekly flight restrictions. The businesses include things like flight schools, a sky-banner operation and other aviation companies.

The airport's largest tenant, Palm Beach Flight Training, claims that 14 aircraft and 19 flight instructors were idled during Trump's last visit, which cost them $14,000 after absorbing 2.5 hours of canceled training flights. The school says it's contemplating moving out.

Jonathan Miller, the contractor who runs the airport for the county, says he has already lost $440,000 after a helicopter business moved out of the facility. "This won’t work for four to eight years,” he said to CBS Miami.

Does any of this matter to President Donald Trump? Probably not. If Trump's weekly visits result in crippling local airports and keeping planes away from Mar-a-Lago, then that would truly make his golf courses great again.