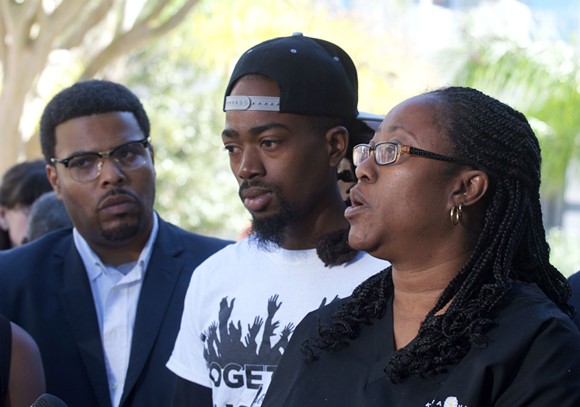 Stephanie Dixon-Daniels wants her daughter's alleged killer Markeith Loyd to die just as much as everybody else. But on Friday morning, she was outside the courthouse in downtown Orlando to support Orange-Osceola State Attorney Aramis Ayala's decision not to seek the death penalty for Loyd.

"I would love for him to die right now, but that's not going to happen," she says. "He will die in prison. An eye for an eye. A tooth for a tooth. Thou shall not commit murder. … I also want him to pay for his hideous crimes of killing my daughter and his unborn child."

Dixon-Daniels stood with about 40 civil rights and religious leaders, anti-death penalty proponents and murder victims' mothers to support Ayala, who was removed from Loyd's case by Florida Gov. Rick Scott after she announced she would not pursue the death penalty for Loyd or any other case during her administration. Scott said it was clear Ayala would "not fight for justice" and assigned the case to State Attorney Brad King. Ayala, who refused to recuse herself from the case, said in her discretion whether to pursue death sentences, she determined doing so was not in the best interests of justice.

Loyd is accused of killing his pregnant ex-girlfriend Sade Dixon last December. He was on the run for about a month before being confronted by Orlando Police Lt. Debra Clayton at a Walmart. After exchanging fire with Clayton, authorities allege Loyd fatally shot Clayton in an "execution-style" manner before fleeing. After an extensive manhunt, police found Loyd hiding in an Orlando home, and he's been at the Orange County jail ever since.

Dixon-Daniels says she wants "closure" in her daughter's murder and is afraid of being repeatedly traumatized if Loyd appeals a death penalty sentence.

"With the death penalty, he's not going to be executed for another 30 to 40 years anyway, but he's going to continue to have the opinions to drag us back in court and relive this violent, hideous act," she says. "He will die behind jail. He will never see the light of day again. … I don't want to have to keep remembering the death of  my daughter each and every time. I want to remember the happy times that she provided for us. This monster will die in prison."

Miles Mulrain, a community organizer in Orlando, helped organize a vigil for at the Walmart where Clayton was killed shortly after her death. On Friday, he spoke in support of Ayala.

"I know she's seeking justice," he says. "If the death penalty was the perfect solution, there would not be any more murders going on. We're trying to get real change to the system that we see is not only oppressing one group but everyone who is a victim of it. … It cannot be the absolute answer to everything is to kill who kills. It's more about seeking justice and seeking real effectiveness."

Christine Henderson, of Equal Justice USA, came down from Jacksonville to stand with Ayala.

"Our mission is to transform the justice system from one that harms to one that heals," she says. "State Attorney Ayala has made an important step toward an improved justice system. She wasn't afraid to speak the truth about how broken the death penalty is, and we're proud to stand with her in her decision to put the resources of her office toward real safety and accountability."

Law enforcement officials and some victims' families, though, are outraged by Ayala's decision, including Rafael Zaldivar. His son Alex Zaldivar, 19, was fatally shot in 2012 before he and his roommates were set to testify about a robbery at their Ocoee home. Bessman Okafor was convicted of Alex Zaldivar's murder in 2015 and sentenced to death. Okafor's case is currently before the Florida Supreme Court because his sentence was not decided by a unanimous jury.

The Sunshine State's death penalty sentencing scheme was on unstable ground after the U.S. Supreme Court found the sentencing law unconstitutional because it allowed judges to have the ultimate decision instead of a jury. Florida lawmakers fixed the process by requiring a 10-2 vote jury vote for the death penalty, which was struck down by the state Supreme Court. The governor recently signed into law a requirement that juries be unanimous when recommending the death penalty.

Rafael Zaldivar says he doesn't trust Ayala with his son's case and is asking for a special prosecutor.

"I have no confidence," he says. "She should resign, and somebody else should take her place right now."