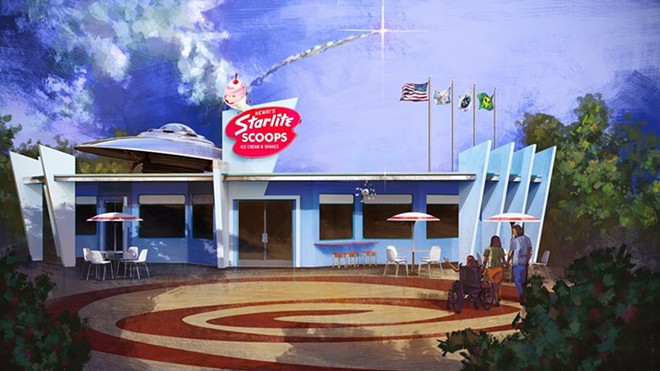 Give Kids the World Village is about to get even sweeter.

The world famous nonprofit resort dedicated to helping provide vacations to children with life-threatening illnesses and their families is redoing their iconic Ice Cream Palace.

The all-day ice cream shop is one of the most popular spots for visiting children. Now, just in time for Village Founder Henri Landwirth’s 90th birthday, the store is getting an out-of-this-world top-to-bottom update.

The Ice Cream Palace will replaced by “Henri’s Starlite Scoops.” The name is a nod to one of Henri’s earliest connections to the hospitality industry. Henri Landwirth was the manager of the Starlite Motel in Cocoa Beach. It was here, back during the Mercury program at NASA, that Henri hosted numerous famous people in his motel. Many of those early connections, such as John Glenn and Walter Cronkite, later became supporters of Kids the World.

Designed by a special team of Disney Imagineers, the new ice cream shop has a 1950s/space/retro feel with interactive elements throughout. Counters will be lower than usual so that children, including those in wheelchairs, can easily navigate the space, and a new menu was developed to reflect the space theme.

An estimated 8,000 families annually visit the Village and nearly all of them take at least one trip to the ice cream shop. Visit Give Kids the World’s website for more information regarding Henri’s legacy and the current fundraising campaign for Henri’s Starlite Scoops.