It’s an unfortunate fact, but many local bands don’t end up recouping their investment when they shell out their own money to have T-shirts or CDs made. The possible reasons are plentiful: Maybe the band broke up; maybe the minimum order was larger than their fanbase; maybe there was a mastering problem and the record sounded like crap. A lot of merch ends up sitting in boxes in garages all over town, waiting to be pulled out for nostalgia’s sake. Or, if we’re lucky, it gets spread out on a table at a merch swap like this and local scene enthusiasts get to take what they want for free. It’s a one-stop shop for fans who want to learn more about Orlando’s musical past – or just want to pick up another copy of that CD they lost years ago. Most of the merch will be free to anyone who wants it, though some sellers may want to charge for some of the rarer items on display. Stick around to hear plenty of tales of “back in the day,” as well as to take in performances by the Pizza Brothers, Bob Hershberger of Bob on Blonde, and Mikey Cortes doing a solo Summer Spiders set. 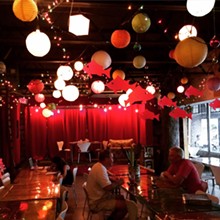