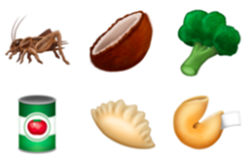 Emojipedia just released a list of potential new smartphone emoji to be released this summer. Ten of them, for sure, are food. They include:
The eleventh emoji, which I am personally counting as "food" because I happen to have become addicted to them while visiting Mexico City, is the grasshopper — or, in Spanish, chapulines.

Wherever you stand on eating insects, these new releases will certainly add to your ability to say so much without saying anything. Which is really all we could ever hope for.