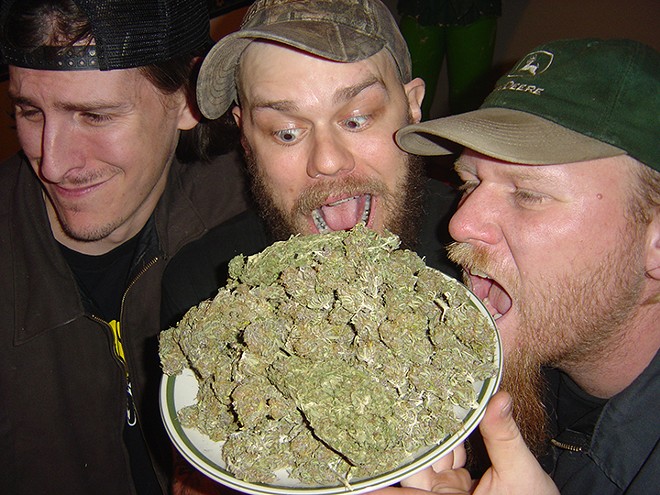 Hailing from Cape Fear (we shit you not), North Carolina, the doom metal trio Weedeater first came to our attention via the name and CV of frontman/bassist Dixie Collins. Collins’ past projects include tar-huffers like Sourvein and Bongzilla, but most importantly the violent and self-immolative sludge outfit Buzzoven, whom we once saw open for GWAR and render GWAR’s haunted house theatrics obsolete by being covered in their own actual blood by the end of their set, and who imploded in a splatter of drugs and recrimination. And yet, Weedeater, despite their own share of self-loathing, physical injury and drug issues, have now been a going, functional unit for more than 17 years and five albums. Newest album Goliathan is their most focused statement yet, bringing in mad scientist engineer Steve Albini to distill their agonized deep Southern gothic sludge down to its purest essence. Weedeater incorporate elements of suicidal country and blues into their “weed metal” template, as well as the vibes of a lifetime spent pushing everything to the absolute limit. Live, they are equal parts unpredictable and undeniable. Get slow.