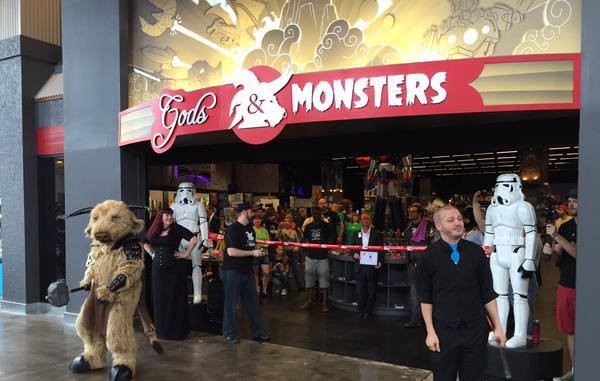 When Artegon Marketplace shut its doors back in January, local tenants had no choice but to pack up and leave.

Gods & Monsters, the mall's popular comic book store, relocated to a 7,000-square-foot store in the Orlando Crossings mall. But its new location isn't the only change coming to this geek haven.

According to the Orlando Business Journal, Gods & Monsters is partnering with Hourglass Brewing in Longwood, with each shop planning to sell the other's merchandise and cross-promote each other.

Gods & Monsters is planning an expansion, moving its retail items into the extra space at Hourglass that the brewery isn't currently using. The shop will be separate from the brewery, with a wall dividing the two spaces.

Gods & Monsters plans to turn its Orlando Crossings location into a "gaming bar," switching out its merchandise for retro arcade games.

Todd Fisher, cofounder of Gods & Monsters, told the Orlando Business Journal that the store wants to move most of their retail items into the brewery because the mall is frequented by Brazilian tourists, who have little interest in collecting comic books.

The new mall location will instead feature a gaming lounge with retro arcade games and offer a selection of Hourglass Brewing's beers at its new bar.

The bar will be called Vault 5421 and will be themed around a post-apocalyptic fallout shelter like those found in Mad Max or Fallout, complete with bartenders dressed like apocalypse survivors.

Gods & Monsters is currently open at the Orlando Crossings mall, but its new bar won't be completed until later this year. The store has a temporary lease, but plans on making the location permanent.

There is no word yet when the expansion at Hourglass Brewing will be complete.