Is Pam Bondi moving to Washington? 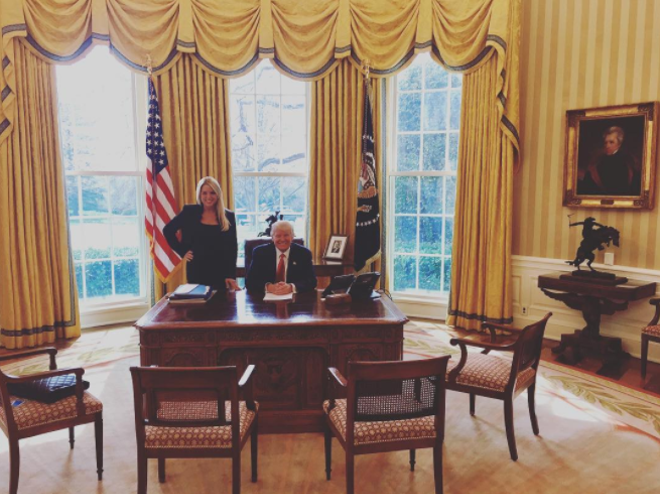 Florida Attorney General Pam Bondi, who isn't shy about posting selfies with Republican lawmakers, might be getting the chance for more photo ops soon.

According to Politico, Bondi brought former NFL players Tony Dungy and Derrick Brooks to Washington on Monday, March 27, to meet with Trump and his cabinet about a children’s initiative.

“I am working on some special projects with the White House,” she told the news organization, without elaborating.

Bondi also announced on Twitter that she would headline the White House's “women’s empowerment panel” on Wednesday with top women in the administration, as well as Trump and the first lady.

I am honored to moderate this panel with such remarkable and accomplished leaders. #Sayfie https://t.co/C7Mjpoy7pC pic.twitter.com/kjHk3q1E8q

There are rumors that she might also take a role in helping combat the nation’s opiate-addiction crisis.

Back in January, Bloomberg reported that Bondi might receive a job somewhere in Donald Trump's administration. After all, she was part of his transition team, and she did him a solid by dropping her investigation into Trump University.

Trump and Bondi have basically been best buds ever since he contributed $25,000 to her political committee. Although, there might be a bit of tension there because his donation ultimately cost him a $2,500 penalty to the IRS after it was discovered the money was an illegal political contribution from the president's charitable foundation, which can't make political donations.

For now, it looks like Bondi isn't disclosing any other plans.

She told Politico that she and the White House will reveal more details about their plans at the appropriate time.