Top to bottom, this was a diverse bill that came with promise and left an impression of what “next” might look like.

Headlining was ascendant L.A. act Cherry Glazerr, a band that’s moving fast. The garage-punk jams of their early Burger Records material were anything but traditionalist. They were in line with their contemporaries there but hinted beyond with curious strands that suggested all sorts of stylistic possibilities. Now, with their recent album on esteemed label Secretly Canadian (Apocalipstick), they’ve taken the plunge into a bigger rock ocean. It’s a new, broader indie sound that draws from the wisdom of a panoply of greats – from Blondie to Sinéad O’Connor to the Breeders and many other points between. And it’s got major-league kick. 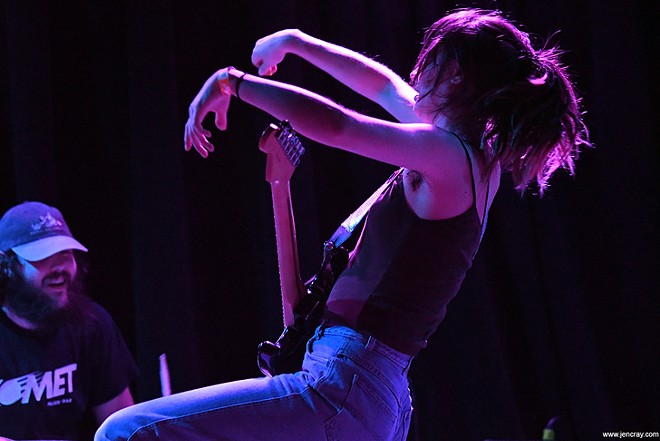 Live, they’re powerful. As the performance proved, their feral punk heart still beats strong. Everything’s just applied with more latitude and depth. Before, they had aesthetic – now, they have mission. This is a more pointed and biting thing altogether. And the whole evolution can be heard in just frontwoman Clementine Creevy, whose whole stance and expression are shaping her into a female icon for the new generation.

That’s a considerable amount of growth for anyone. But remember that we’re talking about a fresh band that’s already undergone a near-total overhaul. Oh, and their creative locomotive is still only 19 years old. Add all that up and it looks like a bright new dawn on a horizon that’s wide open.

Also led by a visionary woman, Jilian Medford, New York trio Ian Sweet was the night’s most art-minded act. Fuzzy, dreamy and oblique, the new Hardly Art band deals in conflicting forces – floats and jags, coos and bursts. While intense and complex rock patterns work underneath, their music has gorgeous textures and swooning pop ether swirling above. But instead of an academic frenzy, the reaction is a brilliant wonder. It’s a marvel of dynamics, tone and bliss that’s unboxable.

Much more straightforward but also dynamic, Chicago’s Lala Lala hit the spot by delivering downcast vibes and sonic brawn on tunes of irresistible precision. There’s no show, just earnest substance. Yes, perfectly Midwestern. These ladies are looking to affect, not dazzle. Their music may not fire off the line, but this unexpected flower eventually blooms, and it’s lovely. By set’s end, they were rumbling with impressive mass and melody.