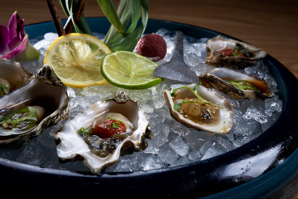 Whether you're into oysters raw, steamed or fried, this Friday, March 31, is your day to devour as many as possible.

We're lucky to live near a major oyster-producing area, the Gulf of Mexico, especially the shores of the Panhandle, and some of the dining spots around town take their shellfish seriously.

Whatever your preferred preparation, here's where you can eat oysters on National Oyster Day, covered in cocktail sauce or not.

DoveCote
The French brasserie housed in the BOA building downtown has a raw bar as its centerpiece. Available only for dinner, the "fruits de mer" bar menu includes a mix of east- and west-coast oysters, shooters and cocktails.
390 N. Orange Ave., 407-930-1700, dovecoteorlando.com

Reel Fish Coastal Kitchen & Bar
This Winter Park newcomer places special emphasis on the freshness of their Florida seafood. Oysters on the half shell comes with cocktail sauce and/or cucumber mignonette. If fried is more your style, there's an oyster po' boy sandwich on the lunch menu.
1234 N. Orange Ave., Winter Park, 407-543-3474, reelfishcoastal.com

High Tide Harry's Reel Seafood
I've been going to this place since I was a kid. The menu is the same. The oysters are cheap. The best preparation is Oysters Harry: A half-dozen shucked and topped with crab meat and three cheeses, then broiled.
4645 S. Semoran Blvd., 407-273-4422, hightideharrys.com

Lee & Rick's Oyster Bar and Seafood House
For 67 years now, Lee and Ricks has been the place to sidle up to the oyster bar and slurp down a dozen or two. A bucket of raw or steamed oysters will cost $26. You can also take oysters to-go to shuck at home if you like, in half-, quarter- or full-bushel orders.
5621 Old Winter Garden Road, 407-293-3587, leeandricksoysterbar.com