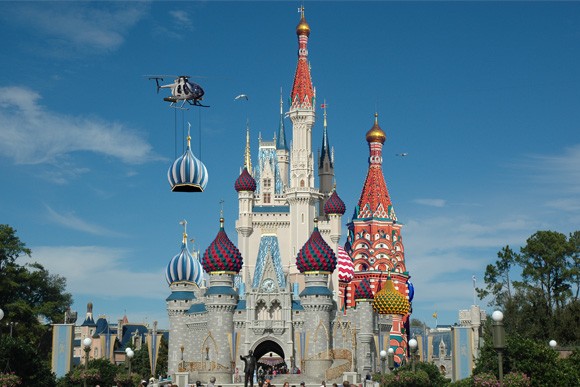 While Disney's Imagineers are busy putting the finishing touches on the audio animatronic version of the 44th president to grace the stage of the Hall of Presidents (Grover Cleveland served non-consecutive terms, but is only represented once), the scenic artists of the Magic Kingdom are rebranding the iconic Cinderella castle to make Donald Trump feel welcome.

Brightly colored onion domes, reminiscent of those on Moscow's St. Basil's Cathedral, have been placed atop the towers of the castle.

According to Disney spokesperson Hildegard Bilgewasser, the redecoration is solely to make Trump supporters feel welcome at Disney, which has come under fire from conservatives recently for including a "gay moment" in its live-action version of Beauty and the Beast.

"We just want everyone to know that Disney is a judgment-free company. Whether you agree with our policies of including minority groups in representation in our films, or you support a president who benefits from foreign interference in an election, your money is all we really care about when it comes down to it," said Bilgewasser.

White House Press Secretary Sean Spicer supported the decision. "I don't see what the big deal is," he responded when asked about the change at this morning's Breitbart-exclusive Skype session. "I think it's great. It reminds the American public – who are taking their kids to get exposed to an approved version of American history – who's really in charge. It's just like when they dressed the castle up like a mosque when Barack Hussein Obama became president."