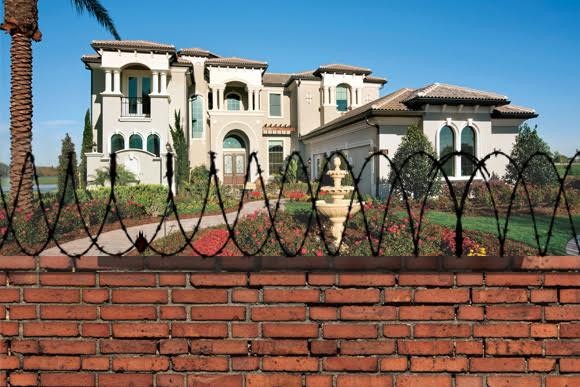 Fed up with people from Kissimmee entering their upscale surroundings, Windermere residents say they want their neighboring town to pay for a 30-foot-high gated community wall.

Last night at the Windermere Recreation Center, Windermere officials presented blueprints for the massive wall, which will surround all of the already gated communities within the affluent district.

"What are we going to build?" asked Windermere mayor Gary Bruhn. "A WALL," responded the audience. "And who's going to pay for it?" asked Bruhn. "KISSIMMEE!" roared the crowd.

Afterward, Windermere resident Karen Mushler told reporters she was very concerned with people she's never met entering her community. "We don't know what types of people they are," said Mushler. "Did they come here to steal jobs? Did they come here for crime? I don't want to find out."

When asked if his city would pay for the wall, Kissimmee mayor Jim Swan responded, "I'm not going to pay for that f*cking wall."