SeaWorld debuts new educational dolphin show, but is it enough? 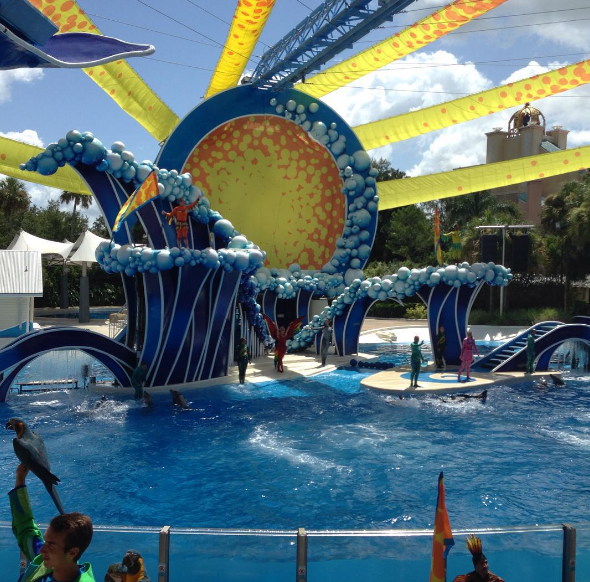 SeaWorld is in the midst of a multi-year refocusing that will remove many of the more theatrical elements from the parks and replace them with a focus on conservation and education.

While the San Diego SeaWorld park has already implemented many of these changes, here in Orlando the rollout has been delayed.

On April 1, SeaWorld Orlando saw one of the first significant aspects of this brand-wide shift. After an 11-year run, the popular Blue Horizons dolphin show was replaced by the more educational Dolphin Days show.

Gone are the acrobats, the well-costumed divers, and the Cirque-style elements, replaced with a much calmer show where trainers introduce each dolphin by name, telling facts about the species and talking up SeaWorld’s conservation efforts.

When Dolphin Days debuted on Saturday, the stage had changed little from the Blue Horizons show, which gave its last performance less than 24 hours prior. (The few elements that remain from the previous show include interactions with the macaws, but the massive vulture is long gone.)

The new show lacks any type of narrative or story development. This is strictly an animal caretaker talk with a few inspirational songs mixed in. Trainers still ride around on the noses of dolphins, but now with a song playing that talks about how natural an important friendship is.

The show, while central to SeaWorld’s new focus, lacks the elements that separated the previous show from the kind of show one might expect from a regional aquarium. Trainers interact a bit more with the dolphins and macaws than in a typical dolphin show, but in the end it’s the same flips through the air, facts about the species, and message we’ve heard before; albeit this time with a welcoming, upbeat soundtrack and nicer set.

San Diego's dolphin show transitioned to the educational Dolphin Days show in August of 2015. The two shows, while sharing a name and central focus, are different. The Orlando show has an original soundtrack, the macaws, and a different set.

In January, SeaWorld San Diego transitioned its orca show, One Ocean, to a more educational show in the same vein as the new dolphin shows.

Since then, attendance at the park has plummeted, forcing SeaWorld to drop ticket prices and causing some to question how much demand there truly is for these new, less entertainment-driven shows. If current plans happen, a similar update to our orca encounter should take place within the next two years.

Speculation has pointed to a possible shake-up in SeaWorld leadership, possibly leading all the way to CEO Joel Manby and his leadership team.
Manby was brought to SeaWorld as part of the last major leadership transition that company undertook in the wake of Blackfish and declining Orlando attendance due to Universal Orlando’s new investments such as Potter and Cabana Bay.

Manby has led the charge for this new conservation and education focus for the company. He has advocated for the new focus in numerous national media interviews over the past two years. Now the shows are rolling out, but it might be the story of too little too late to save his job and the vision he’s piloted.