Markeith Loyd is permanently blind in his left eye

According to records obtained by the Orlando Sentinel, on Jan. 18, Lt. Dan Brady emailed Orlando Police Chief John Mina about Loyd's progress while at the hospital.

"[Orlando Regional Medical Center] needed to perform surgery on his left eye and as a result the doctor said he will be permanently blind in his left eye," Brady wrote. "This was as a result of the injuries Loyd received during his response to resistance." 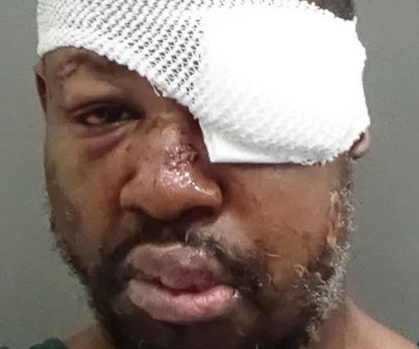 The following day, Orlando Police released aerial footage of Loyd's arrest that appears to show him being kicked in the head after he crawled toward the arresting officers. The camera then quickly panned and zoomed away from Loyd and the officers.

On his way to OPD headquarters after his capture, Loyd shouted to reporters that police had beat him up. He then spent a night at the Orlando Regional Medical Center before being transferred to jail.

Chief Mina told reporters that Loyd resisted arrest and prompted officers to use force when he did not put his hands behind his back.

Special Prosecutor Brad King, who Gov. Rick Scott put in place on the prosecution instead of State Attorney Aramis Ayala, filed notice on Tuesday, April 4, that he will seek the death penalty.

Loyd's next hearing is set for April 12.