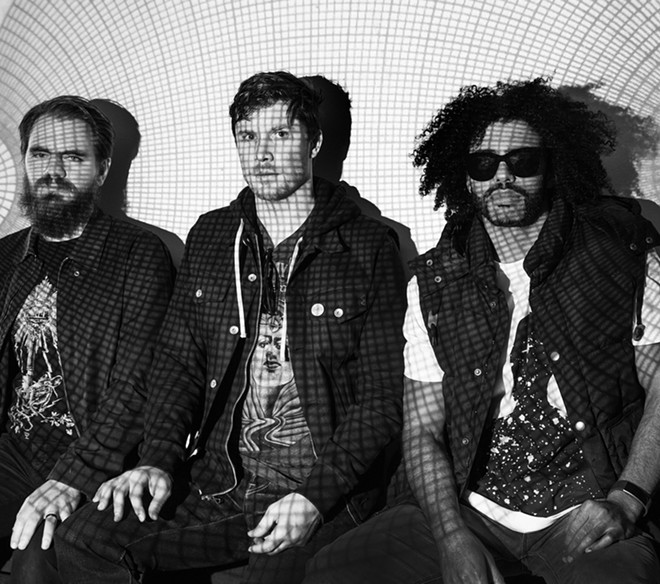 Word is getting out about avant-garde hip-hop trio Clipping. Shit, your mom might’ve even heard about them since MC Daveed Diggs is an original cast member of Hamilton. But no vault in profile could make what they do mainstream. And their high-concept ambition has recently crystallized into a total coup.

Their Orlando stop was a particularly special engagement, one of only two breakaway full headlining performances they’re doing while on a touring run with the Flaming Lips. So, while the Lips were playing out at House of Blues that very night, Florida product SWIMM took over warmup duty instead and Clipping came downtown to top the marquee.

All music being made today is technically contemporary. But little of it is actually modern. The more entrenched and embedded the institutions of popular music get, the more difficult true originality becomes. Clipping, however, are so on the edge of now that they feel like near-future heralds.
Their esoteric music can be a black hole of concept and thought. Despite all the brainy DNA, though, their groundbreaking rap-noise-industrial blend comes together live like a missile with a master plan, landing somewhere between the visceral punch of Death Grips and the clarity of Shabazz Palaces. Their oblique themes can cramp the mind if you really dig into it, but the music can also bang and thrill.

Most importantly, what this performance showed was an absolutely distilled aesthetic, something that wasn’t so guaranteed with their early material. Everything about them – their thoughts, their presentation – is ripening right now. Clipping has finally become a convergence of vision, innovation and execution. More than a show, this was the display of new masters just hitting stride, and this crowd knew it.

It’s hard to imagine precisely how this would’ve translated in an opening spot in a big room before another band’s crowd, but it wouldn’t be like this. And that would’ve been a shame, because what was delivered was an up-close and riveting missive from the frontier.

Young Tampa openers They Hate Change are also future-minded rapper-producers riding the edge of experimental hip-hop. Their compositions are electronic flights with the kind of suspension and austerity that space travel implies. But their recordings are a little too spare, enough to maybe require some narcotic assistance to really vibe with it. Onstage, however, their sonics are more overdriven and their presence more alive. In their more chill frequencies, they still radiate a cool confidence. They’re a little basic next to Clipping, but who isn’t? Their compass, however, points unquestionably forward.