We are all this member of the Blue Man Group 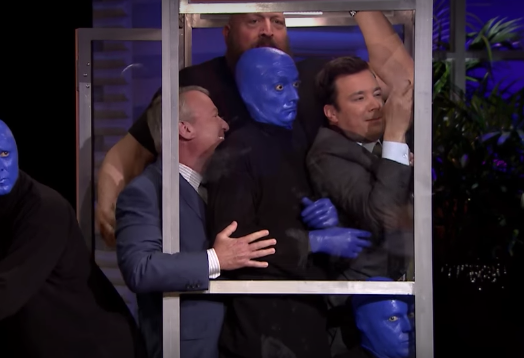 Last night we were pretty surprised when Orlando Mayor Buddy Dyer appeared on The Tonight Show With Jimmy Fallon, but not as surprised as this member of the Blue Man Group.

Sandwiched between our mayor and Jimmy Fallon, this brave member of the Blue Man Group found himself in a very real "life comes at you fast" moment.

Look at his eyes. Those are the eyes of a man who is reflecting on every decision that has led to this situation.

Ahead of him is a giggling man-boy with a new attraction at Universal Orlando, behind him is a guy named Buddy who's just trying to get it in, and of course, surrounding all of this is WWE wrestler Big Show, who probably represents the impending bodyslam that is a part of life.