An alleged sausage thief is behind bars today after he tried to escape police by jumping off of a bridge in Fort Walton Beach, Florida.

After initially being detained, police escorted him in the direction of the squad car, but Bertram seized this small window of opportunity to make a run for freedom, according to the Daily News. 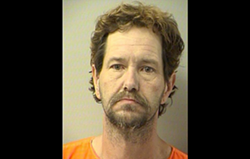 Ignoring orders to stop, Bertram continued to run across all of the lanes on U.S. Highway 98 towards the Brooks Bridge.

He then proceeded to jump off of the bridge, landing 8 feet below on Brooks Street, where another officer who was on the street saw him, told him to stop, and was ignored.

The officer then used his Taser to subdue Bertram, before taking him into Okaloosa County Jail on the meaty charges of shoplifting, resisting arrest, and giving a false name.