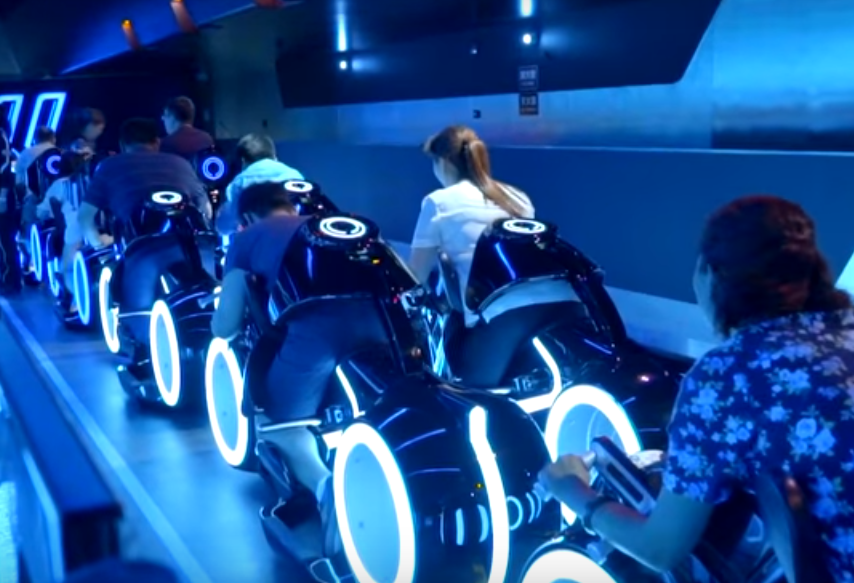 With new attractions coming to , Hollywood Studios, and more than likely Epcot before Walt Disney World’s 50th Anniversary in 2021, one park still seems to be missing out in the celebration.

The Magic Kingdom has yet to see any major updates going into 2021. Many of the new shows rolling out now will feel tired by 2021, but we finally are beginning to see a few rumors of what Disney may have in store for Magic Kingdom’s golden anniversary: a redo of Tomorrowland with a major E-Ticket addition.

At Shanghai Disneyland, the new Tron coaster has become one of the most popular attractions in the park. Now, in typical Disney fashion, the company is looking to copy this ride in many parks, beginning with the Magic Kingdom.

The coaster has long been rumored (mostly by fanboys) to be heading to Epcot’s Future World, but with possibility of two new countries coming to the World Showcase and numerous new attractions throughout the park, many industry insiders, such as Jim Hill, are now saying that the coaster is heading to Tomorrowland.

This would line up with an older rumor of Disney finally closing the woefully outdated Tomorrowland Speedway. Another possible location, though much less rumored, is the Cast Member parking lot located between Tomorrowland and front of the park.

The Tron coaster would anchor an update to Tomorrowland, sharing the spotlight with Space Mountain as the icons of the land. There are few details on what the Tomorrowland Tron coaster would look like, but it’s likely to feature an outdoor area, similar to the Shanghai one. This would also a tie in to the larger updates rumored to be happening in Tomorrowland that may include a Wreck-It Ralph attraction, an update to the Carousel of Progress, and general updates throughout the land.

The coaster, which features motorbike-style seats and a launch, is a bit more of an action ride than what the Magic Kingdom has traditionally had, but when Space Mountain first opened it was viewed as a thrill ride. Thrill rides have proven popular at other WDW theme parks, and they dominate most other area theme parks. Currently, guests at the Magic Kingdom can only get their adrenaline pumping through Big Thunder Mountain, Space Mountain and Splash Mountain. It is possible that Disney may tone down the thrills of Tron when they replicate it here, possibly even cutting out the coaster for an entirely different Tron-based ride, but with the current ride proving so popular in Shanghai, it’s not likely they’ll want to mess with success too much.

While the Tron films were pretty much failures at the U.S. box office, Disney is currently looking to reboot it, this time adding Jared Leto to the cast. But even if the movies never return, Disney could still move forward with the attraction. They've used less popular movies in attractions before, such as Song of the South in Splash Mountain.

With the 50th anniversary only four years away, Disney will have to begin construction on the new coaster very soon. Let’s just hope they don’t use the same timelines as they did with Pandora.