West Art District near Downtown Orlando is facing a potentially existential crisis: City Hall cites an ordinance violation that may require the District's owners to remove all of the artwork on the property, effectively undoing months of artistic progress.

The art district is apparently in violation of section 30A.36(D) in the Code of the City of Orlando, which lays out maintenance standards for businesses in Orlando. “All store fronts and walls exposed to public view shall be kept in good repair and shall be substantially weathertight,” the section reads.

West Art District is clearly not your average business. Artists from around the world have been invited to paint massive murals on the property's walls lining Parramore's Central Boulevard. Harrison Rai, the realtor who oversees the District’s artistic development, has been ushering in local and international graffiti artists since late 2016. Rai was notified of the violation by City Hall in January. 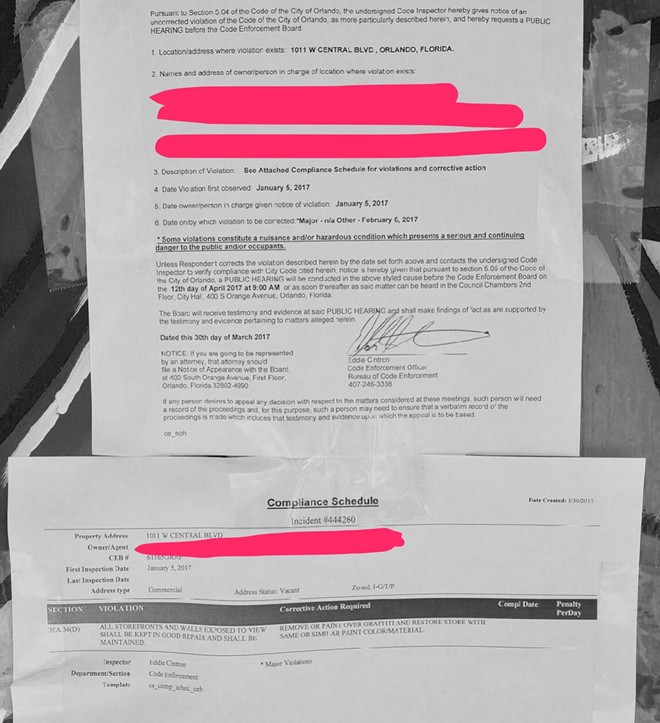 Rai and his associates are now expected to attend a public hearing at City Hall this Wednesday at 9 a.m. to address the violations. When asked how he expects the hearing to play out, Rai showed hope, saying he "really wants to work with the city" in being a part of Orlando's artistic fabric. "Orlando is already a pretty big tourist destination for the world, so why not add art to it."

According to City Hall, a resident living near West Art District contacted the Code Enforcement Division to complain about the murals which defied the city's mural policy.

"Because the City values what murals can bring to our community, we have proactively tried to make contact with the property owner multiple times since the discovery of this issue with the goal of discussing opportunities and options that will allow for art to remain on these buildings," city staff said in a statement about West Art. "We are hopeful that in partnership with the property owner, we will be able to work towards a solution."

In a nod to Orlando's booming art scene, Mayor Buddy Dyer proposed a mural ordinance in early 2015 that created a more welcoming approval process for businesses with art-ready walls. Establishments with pre-existing art were grandfathered into the program, while any mural developments after the ordinance took effect would have to complete a "joint application" between the property owner and the artist.

"The application must be submitted in advance of the mural being installed," the city said. According to mural policy, West Art would have to comply with a few more trivial maintenance standards if it continues to grow as an art district.