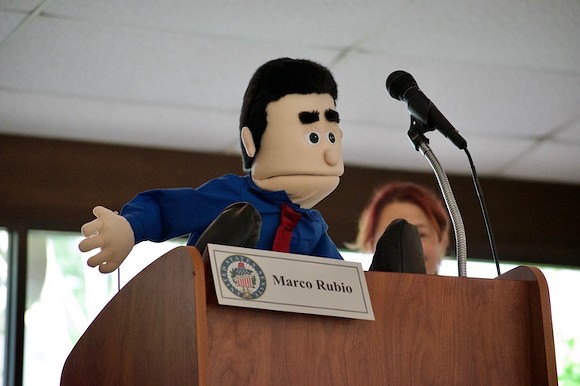 As expected, Sen. Marco Rubio was a no-show at Saturday's constituent town hall in Maitland. But a special guest did show up to answer questions for concerned citizens.

On April 15, around 50 concerned Central Floridians gathered at the Maitland Civic Center to raise their concerns about Rubio's continued absence at town hall meetings across the state.

Despite multiple invitations delivered by letters, phone calls and in person, Rubio didn't attend the town hall. Instead, "Lil Marco," a pint-sized puppet version of the senator, made an appearance to answer constituent questions.

The event was hosted by Indivisible Central Florida, a chapter of the larger Indivisible activist organization that was formed as a response to Donald Trump's presidency.

Since Rubio wasn't there to answer questions himself, Indivisible Central Florida used Lil Marco to hold a skit of sorts, asking attendees to ask the puppet prepared questions.

Lil Marco's answers to the questions were based on research the group had done prior to the event using information they took from Rubio interviews in news articles published throughout his campaign.

The event also included an open mic section, where constituents were able to address questions to an iPhone video that Indivisible plans to send to Rubio's office.

Attendees asked Rubio to address issues ranging from immigration, to health care to the environment.

O'Brien adds that the group decided to hold the Maitland town hall meeting, even though the probability of Rubio showing up was slim, because he feels the senator needs to understand that being elected means representing everyone, not just the people who voted for him.

"I know you can't please everyone," he says. "The conversation, however, has to be had."

A spokesperson from Rubio's Orlando office told the group that Rubio couldn't commit to the town hall because of previously scheduled commitments.

In the past, however, Rubio has said he doesn't show up to these town halls because of their "hostile atmosphere."

Allison Holmes, from Longwood, says the senator is spineless.

"I'm not a left-wing extremist, as I believe he calls people," she says. "I'm just worried. ... There must be some reason behind these town halls. If you can't stand in front of a mother with three kids, who can you face?"

Holmes' son JJ made national headlines last fall when he was kicked out of a Trump rally.

Holmes says JJ, who has a severe case of cerebral palsy, wanted to go to the rally after seeing how Trump had mocked a disabled reporter on the campaign trail. But, while at the rally, JJ himself was mocked and Trump supporters kicked and shoved his wheelchair as he was removed from the event.

Now, she says her son wants to know why somebody who's supposed to be a check on Trump, something Rubio promised to be when he ran for office, won't stand up to the president.

Kenny Biernat, a Winter Park resident, says that he hasn't noticed any hostility at the political events he's gone to.

"They've, as a general rule, been very peaceful. The constituents are concerned with the direction their country is going in and they would like a representative who will represent them."

Biernat currently receives coverage under the Affordable Care Act and says he is worried about his health insurance being taken away. With so much at stake, he's trying to get more involved in the political process than he's been in the past.

"The more people that get involved, the louder the message is that we send to our representatives," Biernat says.

O'Brien adds that Indivisible never set out to create hostility: The organization suggests that people be respectful, but persistent, when asking for answers at town halls.

"Additionally, he won't know unless he shows up to one," he says. "But I don't think he's very good at showing up."

If you're looking to get involved with Indivisible Central Florida, you can find the group every "Trump Tuesday" in front of Rubio's Orlando office, located at 201 S. Orange Ave.